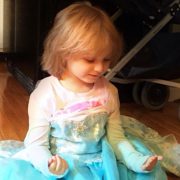 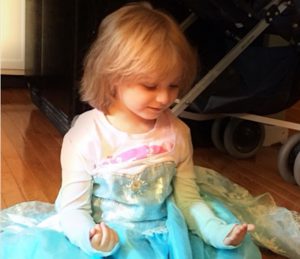 My daughter Zoey is 4 years old, and is considered non-verbal autistic.

She can’t tell me her wants or needs or if she’s hurt or sick and, as her mom, I want and need to know these things. Through intense early intervention therapies, Zoey has come such a long way and it has been one hell of a ride.

My non-verbal daughter sings—she doesn’t talk—and I found that I could communicate with her through music. There is a song for just about every scenario in our house. If she says “No,” then you will hear her sing, “No more monkeys jumping on the bed.” Yup—that is her rendition of the word No.

Twinkle, Twinkle, Little Star was her first song and it is her go-to song if she’s angry or needs to escape from the overstimulation of a situation or even the world. I watch this gorgeous child as she stands, puts her hand up in the air, and stares into her palm. It’s like she’s seeing magic in her hands that NO ONE else can see. And yeah, I wish I could see it!

I watch her when this happens and I’m jealous—like, really jealous. This one particular stim is amazing.

She has many stims, like rocking and banging her head when she’s trying to soothe herself, and loves to line things up all around the house. She’s a sensory seeker, so she has to touch and feel everything. Sand and water are her absolute faves!

But this one stim, it’s beautiful. When she does it, I know she can’t answer me, but I can’t help asking her every single time: “Zoey, what do you see my love? Is it beautiful? You make it seem so amazingly beautiful.”

Oh, how I wish I could see what she sees.

She does this stim throughout her day with a huge smile on her face, so I know that whatever she sees is angelic; it’s heavenly to her. Seriously, who wouldn’t want to see that? I’ve tried figuring it out for two years now and I never could. That is, until just recently, with the help of her new favorite song.

Zoey and I jam out to music all day and night. Zoey is fast paced and she’s not the kind of kid to sit in front of the TV. In fact, when it’s on, she actually shuts it off herself. I love all kinds of music and so does Zoey.

Music by Carrie Underwood (See You Again), Rascal Flatts, (My Wish) Beethoven’s Moonlight Sonata, and Michael Buble’s Lost… She loves Imagine Dragons, and she digs Elvis too. I am never surprised when a particular song reaches her. She’s had so many different types of therapy, but NOTHING has done for her what music has done for her.

Zoey communicates through music and it’s awesome. I love it because I love music too, it’s our connection.

Recently, I’ve been listening to a new band and she digs them a lot. She comes running from her room if I start playing the song Ride by The 21 Pilots. Not a little jog either—I mean full-on marathon speed, because she doesn’t want to miss the song.

That’s how the Beastie Boys were for me at her age, so I know how much she likes this band.

I had their video on our TV via YouTube, and she sat and watched it. Seriously, this kid doesn’t do TV, so I was shocked that she didn’t try or even move to shut it off. She heard her song and she was watching them sing it on our TV. It was a very cool moment.

I had never seen this video so I was into it too. Then I saw her stim…

The video was dark and then went to a bright light: darkness to light.

Zoey stood up and put her hand up in the air. She smiled a huge smile as she gazed at her palm. and then she closed her eyes. Still smiling, she began to twirl and spin right where she stood… She was dancing, in her own way, to her own beat, as the music played.

I’d been thinking too much about it. It’s really just as simple as this: It’s her pure joy and love for something. Whenever things seem to go dark, she can find a way to see through to the light.

A version of this piece first appeared here.

The Highs and Lows of Autism on Sports Day