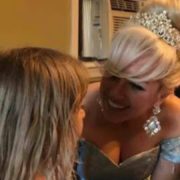 Birthdays are supposed to be fun and exciting for little kids. I know my six-year-old daughter, Anna, is already planning her next birthday party and theme, and it’s only the night after her sixth party ended…she’s that excited!

Birthdays were always so exciting and fun for me too; so much so that I would have my girls’ parties planned, right down to the decorations, months before the party.

That changed for me a month before my youngest daughter, Zoey, turned 2. That was when she was diagnosed with severe non-verbal autism, global developmental delay, and dyspraxia of speech. She would soon also be diagnosed with extreme ADHD.

Her third birthday party was too loud and sensory overload took over—she couldn’t blow out her candles, and we didn’t sing “Happy Birthday” because she started to cover her ears from the noise. I took some flak from some family members because we didn’t sing the “Happy Birthday” song, but I did what was best for my child and will continue to always do so.

Zoey’s fourth birthday was a beautiful, sunny day, and I invited just small a group of family and friends for an ice cream social. Ice cream is her favorite, so I thought, “why not build-your-own sundaes?”

She saw everyone gathered around and immediately came over to me to escape the small crowd. I knew it was too much; she wasn’t comfortable. She motioned for the two of us to go inside, and I granted her that. After all, it was HER day. While our friends and family gathered outside eating cake and ice cream sundaes, Zoey and I played with some of the very cool sensory toys that she had gotten as gifts.

Being social is very difficult for Zoey. If we have company, she usually retreats to her sensory room for a “break” and I respect her wishes every time.

I had no idea what I was going to do this year for her fifth birthday. I know that 5 is a milestone birthday and, thanks to school and therapy, she had come a long way from years past.

I noticed she was listening to the original Cinderella cartoon songs on her tablet. She would sing along with Cinderella to the song, “Sweet Nightingale,” and watching her sing was beautiful. Soon, she started watching the cartoon and she never shut the TV off, which she usually does—she was actually enjoying it and captivated by it! It made my heart happy to see her enjoy something. Zoey liked Cinderella.

I did some research and found Precious Parties by Kayla, which does Princess Parties. I got in contact with Kayla and asked if she would come visit Zoey on her birthday, explaining that she has autism and got overwhelmed easily. We booked her: Cinderella was coming to Zoey’s fifth birthday.

Cinderella arrived not long after our guests. All the other children squealed with excitement when Cinderella sat down and gathered the children around her to show them a treasure chest full of trinkets and fairy wings. Then she pulled out a Cinderella book, looked right at Zoey, and pointed to Cinderella on the cover and then at herself. Zoey said, “Cerella.”

Zoey knew that Cinderella was here at our house. It was overwhelming for her and she took many breaks. Cinderella did face painting on all the other kids while Zoey sat on the couch, having me give her deep compression (squeezes) on her legs. My husband came over to us and said, “Cinderella is here for you, baby girl.” Zoey kept taking my hands to do deep compression on her legs, as I looked up at my husband and said, “We tried, we tried.”

Zoey was definitely intrigued by this beautiful Cinderella at our house, and she actually went up and approached her three times. I was moved and close to tears, because no matter what Cinderella was doing—face painting a child, answering a question, whatever it was she was doing—she stopped every time Zoey approached her, and she treated her like the special little princess that she is. That meant everything to me.

We brought out the cake and we sang “Happy Birthday” to Zoey, and it was the first year that she blew out her candles. Cinderella cut her cake, took pictures, signed autographs, and then said her goodbyes, and off she left on her way back to Prince Charming.

Thank you, Cinderella, for making THIS birthday special for my special girl. It went exactly how I had planned.

I’m Thankful for the Good Days
Scroll to top