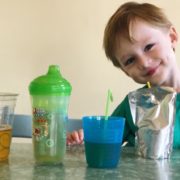 Yesterday,  a fellow special needs mother, whose son was recently diagnosed with autism spectrum disorder, asked me a question. She asked me if there will ever be a day when she won’t worry. I attempted repeatedly to respond to this question, typing then erasing, typing then erasing. I didn’t know the answer. Who am I to say or know anything about anything? But I especially did not know this. This question has haunted me for the last 24 hours.

I don’t know. I don’t know if there will ever be a day that she won’t worry. The infinite, multiplying questions that come with an autism diagnosis are like rivers that part into dozens of streams that eventually lead only to an ocean of uncertainty. I don’t know. There is so much that I just do not know.

While I do know that my son is incredibly smart, I also know that there is a possibility that he will never be able to fully convey this intelligence to the world. What if he can’t connect with others the way that he can with me? What if he is bullied, taken advantage of, made into a spectacle?

What if he can never ask a girl to a dance, or tell a woman he loves her, or get married, or have children, grandchildren? What if something happens to me? What if it gets worse instead of better? What if I lose him again to another year of regression? What if he doesn’t come back this time? What if he never finds the words that are on the tip of his tongue? What if they stay there forever?

While autism comes with many questions, concerns, and challenges, it also comes with a bold and beautiful silver lining. Autism knows no cynicism, judgement, or cruelty. It knows no greed.

In the same way that my son doesn’t always understand questions, I know that he does not know malice. While my son may face bullying in his lifetime, I can say with confidence that he will never be a bully. While he may not be able to communicate with others as deeply as he does with me, we share a bond that much stronger because of it.

For every word he cannot find, there is a look he gives me that I wouldn’t trade for the dictionary. He may not respond to “I love you,” or give kisses on demand, but when I do get a kiss from him, there is not a kiss more genuine in this entire world. We face daily frustrations trying to communicate with one another, but after the confusion settles, and I am finally able to interpret his request, the look in his eyes is one you will see nowhere else. It is one of pure connection, gratitude, and contentedness.

There is an irony that come with autism. It is as if the gene that aids in communication, speech, and sensory intake lends itself to more important and fundamental human features. Just as our hands and feet get cold when our bodies choose to keep our blood closest to our most vital organs as a means of survival, it is as if autism chooses to pool its energy into the most valuable and moral aspects of humanity, while willingly sacrificing the priorities of the neurotypical brain.

In other words, what is important to us as a culture is not necessarily that which is most valuable to our species. Society looks at autism and sees a deficit, when in reality the real deficit is in our own neurotypical thinking. It is typical for parents to worry over their child’s future career and marriage, rather than staying up late, tossing and turning over their child’s future character and moral fiber.

While I still don’t know if there will ever be a day that this fellow special needs mom does not worry, I would bet that there will be a day when she cries tears of joy over a miraculously met milestone that she never thought she’d see, while on that very same day a different mother will cry tears of disappointment over her neurotypical child’s deceit or corruption. The point is, life is a trade-off. None of us are spared the worry we feel over our children and their futures.

The satisfaction found in parenting is not driven by college degrees and six-figure salaries. I know firsthand that those things do not bring happiness. As a parent, adjusting to an autism diagnosis means adjusting our expectations of what truly matters in this life, and aligning them with what is, perhaps, a more altruistic perspective. So while our children often need help adjusting to the world they live in, so do we. We also must adapt our conditioned brains into recognizing what is truly worth worrying over at the end of the day.

The satisfaction found in parenting any child is found in the pride we feel when we see our children do the right thing, tell the truth, help another person, accept others, and just love us back unconditionally. Today, I am not worried for my son in any of these areas; he shows me every day how to be a better human being. And while my neurotypical brain has convinced me over the years that things like eye contact and sarcasm matter, my heart tells me that character and authenticity are what really count in this lifetime, and if that’s the case, I’ve got a lot less to worry about than most people.

So, to try and answer my fellow special needs mom’s question, there are many things I still do not know, and a corresponding worry for each unknown variable in our life’s equation. I will probably worry about my autistic son every day for the rest of my life, just as I will for my neurotypical son. What I do know is that my worries are no more or less than those of any neurotypical parent. Allistic or autistic, that’s being a parent. The worries are merely different. And if our children have anything to teach us, it’s that “different” can be so much better than anything we ever could have planned for.

Founder at Diaper Diaries
UCLA grad, mama to two toddler boys, writer, advocate for autism awareness, and valley girl philosopher, searching for the meaning of life in between diaper changes. With stark honesty and impassioned vulnerability, Megan explores the duality of modern motherhood and all that it encompasses on her blog, Diaperdiaries.blog.

Why It’s Actually Not Selfish to Take a Holiday

How We Hide Our Autism
Scroll to top