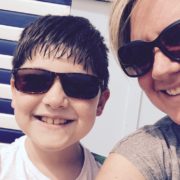 The power of social media and the internet is amazing. Information is at our fingertips whenever we’re ready to access it. Yet, immediately after Joseph was diagnosed with autism, I could not face the plethora of information that was out there. It was simply too overwhelming.

Support groups, online chat forums, literature, workshops. You name it, it was there ready and waiting, but my emotional state at that time couldn’t absorb what I knew was there to help me.

When I did eventually open up, it seemed like everyone knew someone who was autistic and had a story to tell. Although well-meaning, I still didn’t want to hear it.

The reality of autism is there are so many different facets to it. At age 3, I didn’t know where my son would fit; I still don’t know now. I’ve heard countless tales about people with autism who go on to gain a degree, get married, live independently. And whilst these very stories are amazing and give me hope, I know that it is highly unlikely that Joseph will achieve any of these.

Now please don’t mistake me for one of those parents who cannot see any positives and who doesn’t encourage their child to reach for the stars—far from it! And equally, I won’t be told that my son won’t achieve anything, either. It’s just so hard to know what the end game will actually be and this is why I avoided reading too much about autism in those early days.

I recall sitting amongst a group of parents, who talked for two hours about all the issues that were causing them stress. Although I strongly believe in the need to offload now, it wasn’t for me then. I wanted to be surrounded by people who were slightly further down the road, who could tell me: “You know, I absolutely get where you are coming from and that it is shit, but you’ll get through it.”

So, by the time I started my blog, I decided that’s what I wanted to be able to do for other people. I can’t tell you whether your child will be capable of attending a mainstream school or a specialist one. I can’t tell you whether your child will ever sleep through the night or whether they’ll ever use the toilet. But what I can tell you is this: We all have very different experiences, and your parenting style needs to fit with you as a family.

Never assume that your child cannot achieve something, purely because of his or her diagnosis. It may create hurdles along the way, but I truly believe that Joseph may not have had the same successes if I’d had a different attitude.

I once heard a parent say that her child constantly took his coat off in the middle of winter and didn’t feel the cold. She went on to say that she couldn’t tell him to put it on because he had autism—he wouldn’t understand. How did she know that? How did she know that part of it wasn’t him being a typical 4-year-old boy pushing the boundaries?

Truth be told, I never know how much of what Joseph is rebelling against is due to his autism or because he’s a bright young lad who’s trying his luck. If I always said that he couldn’t do something because of his autism, I am certain we would be dealing with a very different child now.

I’ve always had the “can do” attitude and want Joseph to be exposed to as many different situations as he possibly can. I want to push him out of his comfort zone without him falling to pieces, so that he can see and feel more of the world. I access as many mainstream activities and services as possible, but know when to pick my battles and choose something that may be tailored to children with autism.

I’m a strong advocate for inclusion and integrating children with additional needs into mainstream education, with the caveat that they are able to learn, achieve and receive appropriate support. Looking to the future, it is likely that Joseph won’t continue his education within mainstream, and there would have been a time that I would have seen that as a failure on my part.

Now I realise that failing would only be if I put my own needs before his.

Founder at Joseph and his Amazing Spectrum Coat
Tina is mum to nine-year-old Joseph, who has autism, and she recently won the Bloody Awesome Parents (BAPS) SEND Newcomer Blogger Award. She likes to give an honest (often sweary) account of their lives dealing with autism, sharing both the highs and lows.

How One Mother Connects With Her Autistic Son