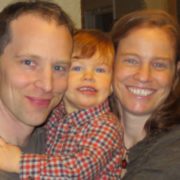 This month, my husband and I will celebrate our twentieth wedding anniversary.

Twenty years ago, I wasn’t concerned with the latest autism research, inclusive education or fighting for disability rights. I was worried about my weight.

My wedding dress fit perfectly except for an ugly bulge of belly fat. Three weeks out from W-Day, I started an emergency Slim-Fast diet, replacing meals with eight ounces of pink, strawberry-flavored froth.

By some twist of logic, I persuaded my fiancé to diet with me. It wasn’t fair, I protested, that brides have to starve themselves into Barbie-sized dresses while grooms get to marry in the relative comfort of suit pants. I railed against unrealistic images of feminine beauty, sexual double standards and the objectification of women until he said, “Alright. I’ll do it.”

Every night for three weeks, we power-walked around our Chicago neighborhood, returning to our battered, shoebox-sized apartment. We’d roll out the TV cart, crack open two cans of Slim-Fast and watch countless episodes of Mad About You. We couldn’t wait to be married, simply so we could go back to eating solid food.

Fourteen years later, we were blessed with a son. It was a difficult conception and a near-catastrophic birth, followed by several years of anxiety about his development. By age 2, it was evident to me that our son had challenges and required more help than we alone could give him. My husband disagreed.

For several months, we stayed up most nights arguing. We fought over the inconceivable question of whether or not there was something “wrong” with our child. I maintained that our son’s behavior was out-of-the-ordinary and we needed to intervene now. I cited as evidence the increasing number of “incident slips” being sent home from our son’s preschool and their urging to get him evaluated.

My husband agreed our son could be intense and difficult to manage, but not exceptionally so. Lots of boys act up, he insisted. He wanted to hold off on any kind of evaluation to see if our son’s issues would resolve themselves over time. He didn’t want some doctor mislabeling or meddling with his boy. He accused me of over-reacting; I accused him of denial.

The distance between us grew. In the past, we’d always been on the same team. Whether partaking in a ridiculous diet, facing a family death or undergoing infertility treatments, we’d endured our struggles together. Now, when the stakes were highest, we each felt abandoned by the other.

The turning point came late one night after a prolonged argument. We each lay in bed, staring up at the ceiling in a silent stalemate. We had reached that devastating precipice in a marriage where there is nothing left to say and the future feels uncertain.

Finally, I turned and faced my husband. It was as though I was seeing him for the first time in months. His eyes were red and swollen and his forehead deeply creased. His look devastated me. I saw in it a mirror of the worry and anguish I thought I carried alone. He clearly felt it too. Seeing him so vulnerable stripped me of my own defenses. I began to cry.

We reached out and held each other tightly.

I can’t say we’ve agreed on everything since. When we do disagree, it’s this place we try to return to: a place of joint tenderness and vulnerability, of being held together by our fears but united in our love for our child. Neither of us would ever accuse the other of not loving our son. We both want what’s best for him even when we disagree on what that is.

I never lost my belly fat. Two kids and 20 years have only added more bulges. Still, I might purchase some Slim-Fast for our twentieth anniversary. We can split a can, watch reruns of Mad About You and remind ourselves of the challenges we have overcome.

The original version of this post was published here.

Founder at Somewhere Over The Spectrum
Lynn Dixon is a mom, writer and advocate for neurodiverse families. She lives in Seattle, WA, with her husband and two sons. You can read more of her work at somewhereoverthespectrum.org and follow her on Facebook

Staying Positive, Even When Some Days Are Hard

I Have This Thing Called Autism
Scroll to top