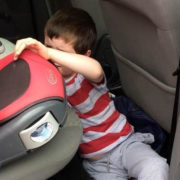 We live in a world where image is everything. We seem to want to SEE much more than we want to read, listen or do. So much so, in fact, that more and more comments on my Facebook page are now animated images in the form of gifs rather than written comments. Pictures say much more than words can at times.

That’s why I wanted to share this picture of my son. 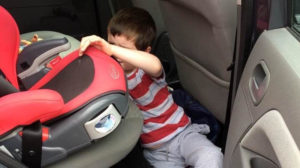 My son has great difficulty with transitions. He really struggles to move from one thing, one activity or one place, to another. In the photo, he could not climb out of the car and into the house because something was causing him huge stress. He stayed like this for almost an hour.

It is something people rarely talk about with autism.

When I see pictures of children with autism, there tend to be toys lined up or a child playing on their own or even (much to the upset of some) a child in meltdown. Memes and awareness materials talk of children having meltdowns because there are no chicken nuggets left, or asking shops to turn music down and dim the lights for an “autism friendly” event, and so on. What about the people with autism who can’t get out of the car to get into the fast food restaurant or the supermarket in the first place?

The latter is much more my reality with autism.

We see people with autism portrayed on television as perhaps adults with fixations who talk about these fixations over and over again, much to the “amusement” of others. Sometimes we may even see autism portrayed as a child being excluded from school for bad behavior, or a family in the newspapers pleading that a certain food should be retained by a manufacturer because it is all that their child will eat. Meanwhile, my son with autism cannot speak a word, has to be carried into his school transport kicking and screaming, and would eat anything put in front of him (including inedible items too!).

So, what is my point? Autism is not what people think it is. There are so many things my son struggles with that people keep telling me “that’s not his autism” simply because it is not THEIR experience of autism. I have been corrected by so many well-meaning people over the years when I state that my son has severe autism and learning difficulties. People will argue with me that the fact he cannot count or read or write is unrelated to his autism. That’s because they have an idea what autism is and my son does not fit into that mould.

Which brings me right back to my photograph.

I live with a child who cannot go from one room in the house to another without screaming. He cannot leave the house without having to have a long list of objects with him, including his iPad. Getting in and out of a bath is a huge issue. Helping to change his pyjamas to clothes and vice versa involves me being attacked and screamed at. Not getting to sit on “his” seat is a disaster that takes weeks to recover from. Having the wrong thing on his breakfast plate is like starting a world war. Someone visiting is a trauma that we can never seem to manage to prepare him for. Unexpected gifts, the doorbell going, the phone ringing…they all cause him hysteria.

Everything is a huge struggle for my son. Dimming lights and turning off music is great for some, but he would never make it out the car anyway so it makes not one difference to my boy. Asking people to be more tolerant of a child in McDonald’s is great too, but I have long since learnt that the drive-through is all we will ever be able to manage.

I am not sure how people could really be more “aware” of people like my son. To be honest, we are housebound most days anyway, so people don’t see our autism.

Which is the reason I took this photo. And the reason that I am writing this.

I guess I just want people to realise that you can have as many autism-friendly Santas at Christmas as you want, but it still won’t help me or my son.

It would take him an hour to get out the house, another hour or more to get out of the car, and an incalculable amount of time before he would even enter a new building, let alone visit Santa.

How We Hide Our Autism