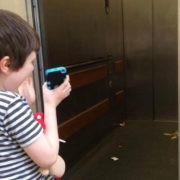 My son love lifts (elevators, to those of you in the U.S.). He has for many years now. He watches lift doors open and close on YouTube, he knows every shop in our town and beyond that has a lift, and when he has hospital appointments we have to visit every lift in the entire hospital.

It rules his life. He is drawn to lifts like metal is drawn to a magnet. He cannot simply walk on by or use it for the functional purpose of just moving up or down one floor. No! He has to press every level, every time. He has to get out at different floors and watch the same doors open and close from every possible angle. He has to flap and dance and giggle at people getting in, people getting out and the repetitive announcements telling you which floor you are on. He has to touch every wall, put his ear to the back and have a fit of the giggles at me preventing him from pressing the emergency alarm…at every single level!

I can’t just go to the shop to pick up milk or a loaf of bread because my local supermarket happens to have a lift in the car park and two inside the shop. He either cannot come with me (which involves a complete meltdown because, despite having limited understanding, he seems to sense when I am going to somewhere with a lift) or he comes with me, and I risk leaving after having only made it to the lift. Moving him on is almost impossible. It involves him self-harming and screaming, and me physically dragging him and sometimes having to call for backup. It is not pretty.

He loses all track of time in a lift. It is like an entire world to him. He loves the noise, the echo, the shiny walls, the confined space, the predictability, the voice that comes out at just the right time, the buttons he can press and the feeling of it moving. It is exciting. It is his “happy place” and he would stay there all day, every day. But I can’t let him.

But I film him so he can watch himself back. I use “first and then” and desperately bribe him to come away. I use timers and warnings. I use visuals and talkers. I could send God himself to rescue him but Isaac still would not care.

He is consumed by his obsession and nothing will move him on.

Isaac is loved deeply. We allow him time at his obsession even though his sister would rather stick pins in herself than be at a lift. But what do you do when every family outing, every waking minute on YouTube and every Google search (for images, as he has no ability to read or write) are all consumed with your child’s obsession?

There has to be a balance. Isaac has no understanding of why he cannot be utterly saturated in his own obsession. He has no awareness of the needs of others or that shops even have closing times. He craves the sensory feedback of lifts like you and I crave water and food. To deny him that would be to destroy him.

So, what do you do when you are consumed by the needs and wants of one member of the family?

It is hard to get the balance right. We have tried the splitting-up idea, where one adult has the thrilling day of lifts (yes, I am being sarcastic!) and the other entertains his sister. That eventually causes resentment. We have tried days without lifts (that was that awful screaming you heard ringing in your ear thousands of miles from me). We have tried compromising. (Have you ever tried to reason with a severely autistic, non-verbal 8-year-old? It isn’t fun!) We have even tried the seesaw approach of you get a lift and we all get something we want too. That went down like a lead balloon.

There is no “little bit” when it comes to an autism obsession. There are no “forget about it” days.

We are trying to teach our son patience, self-control and limitations. Meanwhile, he has other ideas…

By the way, I spent so long at a lift today that I typed most of this up while watching him. His obsession really has consumed me now, too…I am even writing about it!

That is what happens when your child’s obsession consumes the whole family.

Still the One
Scroll to top