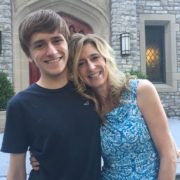 As with all of my son’s musical performances, I had arrived an hour and half early so I could be in the front row. Some of this is so I don’t get stuck behind someone with an extraordinarily large head and can actually see my son, but, mostly it is so my son can see me.

The music begins, and my teenage son walks across the stage. I swear I can feel my heart expand. He finds his mark, turns towards his fellow performer and engages in pretend conversation. I smile proudly, recognizing the irony of him easily acting out a conversation on stage while actually being part of one offstage is difficult for him. As the scene unfolds and the music begins, he starts singing and comes to the front of the stage, directly in front of me. My smile gets bigger.

Still singing in that beautiful tenor voice of his, he doesn’t miss a beat as he searches the front row. He knows that’s where he will find me, and sure enough, he does. He sees me. His eyes lock with mine and he tries to fight back the smile so as to not break character.

He sees me. Whether I’m to the left of the stage or the right, whether I’m across the kitchen table or beside him, whether I’m in the back of the classroom or the front, he sees me because I am the one who is always there.

Over the years, the way my son sees me has changed in many ways.

As a sweet, happy infant, he saw me as the one who provided the milk, picked him up when he was sad and sang out-of-key (before he knew I was out of key and cared).

As a toddler, with severe sensory sensitivities, he saw me as the one who calmed him after haircuts, thunderstorms and close encounters with any type of winged insect, and did whatever I could to “make it better.”

As a little boy, whose need for routine and sameness made the world feel calmer, he saw me as the one who found the right shirt, the right shoes, the right mac and cheese, and the right waffles, no matter how many stores we had to enter to find the “right” whatever.

As an anxious middle schooler, he saw me as the one who nagged him and pushed him to do things and try things that he did not feel comfortable doing because I knew stepping outside his comfort zone would help him be successful.

I’m still the one.

Of course, it makes sense that time has changed how my son sees me because time has changed what he is looking for from me. My son may no longer see me as the bug hero, the waffle getter or the right shirt finder because his needs, his wants, his fears, and his dreams have changed.

How he sees me may be different, but what matters most is that he still looks for me and knows I’m the one who will be there. Regardless of how badly I sing, how annoying I am and how much I push and nag, he will always see me because I have always been, and will always be, the one who sees him.

When Your Child’s Obsession Consumes the Whole Family

‘A Boy Called Po’: An Honest Look at Autism
Scroll to top