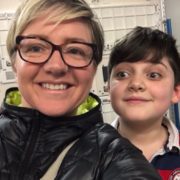 Even before my son, Joseph, was born, I had made a handful of plans as to what he would be. He would be funny, smart, almost certainly athletic, and he would undoubtedly have a successful job.

The day of his autism diagnosis at age 3, those plans were wrenched away from me with just the mention of the one word.

He was non-verbal and still not toilet-trained. How would he ever achieve anything? He was autistic. I plunged into a depression where I just couldn’t see the tunnel, let alone the light at the end of it.

Autistic meant that he would be unable to succeed. Life would be full of challenges that would be difficult to overcome. Who would love my son? How would he ever learn anything when he barely understood anything?

Although I knew that autism was a spectrum disorder, I hadn’t quite realised how wide that spectrum was. I had only read about two extremes: people who were non-verbal and had issues accessing the world around them and people who were high-functioning and could articulate their difficulties, go on to form relationships, and secure employment. Joseph appeared to fit in between those extremes, which in some respects made the future seem so much more uncertain.

There wasn’t a lightbulb moment when those feelings changed for me—it was a gradual process. His communication developed and he eventually started using the toilet. He began hitting some milestones, albeit later than his peers, but he still hit them. I heard stories of people who were non-verbal and still became scholars with university degrees and I became hopeful. I was frightened of setting expectations too high, but I decided that I would give Joseph all of the opportunities he needed to succeed.

I realised that success is not necessarily measured through exam qualifications, but through more subtle achievements. We celebrated a successful shopping trip. We high-fived when he walked out with confidence in front of the whole school and participated in a dance with the rest of his class. We cry with joy when he initiates a conversation and doesn’t just imitate spoken words.

I still don’t know whether he will find love within a relationship. I have no idea whether he will remain within a mainstream school environment or be capable of living independently. What I do know is I will look back and have no regrets about the opportunities I provided him with. As a parent, my difficulty lies in trying to predict the future and determine the end game. But, after all, nobody can ever know that.

Your child being autistic doesn’t mean you can’t have dreams—it just may take some readjustment of your expectations. We still set the bar high for Joseph and encourage him to reach for the top, and he will always have our constant support along the way.

Founder at Joseph and his Amazing Spectrum Coat
Tina is mum to nine-year-old Joseph, who has autism, and she recently won the Bloody Awesome Parents (BAPS) SEND Newcomer Blogger Award. She likes to give an honest (often sweary) account of their lives dealing with autism, sharing both the highs and lows.

How a Dog Made Our Future More Hopeful