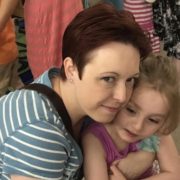 My child is amazing—truly freaking amazing. She is everything that I want to be.

When I’m tired and I think that I can’t possibly push through even one more day, I look at her progress and I force myself to push on through. On days when I feel like I can’t even get out of my own bed because of depression, Zoey mentally pulls me out. I struggle with major depressive disorder, anxiety, panic disorder, complex PTSD, and fibromyalgia, but I can’t just stay in bed—I’m a mom!

One day in August, three years ago, my husband and I drove two hours away to have a specialist confirm what we had already suspected…autism had chosen our child.

Getting any kind of diagnosis is a shock and nothing prepares you for it. If you think you are prepared, well that preparation crumbles in the wake of a specialist looking at you and telling you that there’s something wrong.

When it comes to your child, the last thing you want to hear is that there is something wrong. You don’t want to be handed pamphlets and told to find a support group. They looked at us and asked us, “Do you understand what we just went over with you?” We shook our heads “yes,” but we were obviously in shock, because we couldn’t possibly understand what we were in for.

We were then escorted out the door and shown where to get the elevator. In that elevator, I looked up at my husband, who was holding onto our almost two-year-old daughter, and I asked him: “What do we do? What happens now?”

He replied, “It changes nothing. She’s still our happy child.”

I tried to accept that and believe him as he said it to me, but the diagnosis did change everything for me. I stayed up every night researching, blaming myself, even blaming my own illnesses, what had I done wrong. I cried, sobbed, grieved. I got angry, and I spiraled into another bout of major depression—one of many in my life.

These emotions of sadness, fear, and anger, well, they lasted for more than a year for me. Even on the days that I had thought I had settled with those emotions, they came back looking for more from me. It was a vicious, emotional cycle of tug of war that I was really tired of fighting, and I realized that I needed help.

So, I started seeing a therapist. Soon I stopped fighting those emotions and instead released them. I stopped blaming autism for choosing my child and I stopped the love/hate relationship that I unknowingly had with autism.

I realized I was discriminating against autism—not my child, but her autism. I was treating autism wrong and making it into something scary… Why, because autism is different? I’m different; we are all different.

What’s more, I learned that by talking about my daughter’s autism, it made it feel okay for me to talk about my mental illnesses. I realized different can be scary and we can be afraid of the unknown, but everything and everyone deserves a chance to show you just how beautiful different can be. I tell my children that just because someone or something is different, “Different isn’t bad.”

If not for Zoey’s autism, I never would have woken up and embraced my own illnesses. I wouldn’t be the mom I am today; not just for my kids, but as a person. I became Zoey’s voice when she had none, her advocate when she needed one, and always her mommy who loves her.

In being Zoey’s voice, I found my own voice. In helping to fight for Zoey’s needs, I learned to fight for my own needs. Getting Zoey’s autism diagnosis helped me understand my own diagnoses. Something inside me woke up and I realized autism doesn’t discriminate and that no one should discriminate. By talking and sharing, maybe we can end the stigma surrounding “differences.”

A Letter to the World About My Autistic Son

On the Days That I Break
Scroll to top