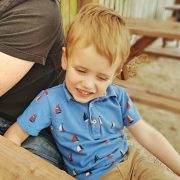 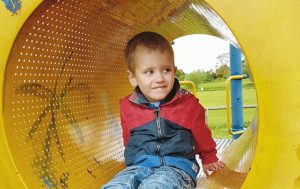 It’s a muggy summer morning, just before 11 a.m., and parents are gathering along the edge of a field that is laid out with brightly coloured objects – balls and sacks and bean bags and tennis racquets. We don’t know anyone – my son was late to move to the preschool room and has only been there a few weeks –  so we huddle together, my husband and I, whispering our worries about whether this is a good idea.

It is sports day, and just as our nerves begin to take hold, there they are – a steady stream of bright little faces, marching obediently in line from their classroom. They walk in a careful line, not holding hands, making their way down the hill in flashes of colour.

We search. There’s our boy. He is holding hands with his key-worker; he can’t make his way down the hill on his own. One hand grasps hers, the other is in his mouth, a tell-tale sign of anxiety and upset.

The field is filled with people he doesn’t know, unfamiliar faces and voices. We wave and call his name but he doesn’t seem to see us. He stares off into space as the children start to line up for the first event – the sack race.

My boy’s motor skills are far behind his peers. He can’t run and jump like other nearly four year-olds do. He finds changes in routine incredibly difficult, noise and crowds overwhelming. He needs help from his worker to get the bag on, up to his chest. The whistle blows.

The other children begin and immediately the field becomes a frenzy of noise and activity – jumping children, shouting parents, sacks flying up and down.

Our boy tries to jump. He makes little staggered movements, half-way between jumps and steps, and he moves so, so slowly. He looks up. The other children have reached the end and are making their way back. He is only a few feet away from the start line. The cheering has stopped. The race is over but a few parents have noticed that our boy is still there, still moving a few centimetres at a time, still desperately trying to jump along. The sack is falling down. His face twists in discomfort and effort – the ache in my chest blooms.

The fact that my son is different, the fact he will always be set apart – it has never been more starkly obvious than in this moment. The other parents are staring now. There are whispers as they wonder why he cannot do it, what is wrong. I blink back tears. I won’t cry while they are watching.

We brace ourselves, fearing he will stop now and sob, or lash out. Surely he will fall apart? This is too much for him.

And he does. Little jump after little jump – so slowly, so painstakingly. It is several minutes after the race ended now but he is over half way.

My gorgeous boy kept on going. Not just in the sack race but in all the others – the bean bag throwing, the ball-balancing, the football kicking. Even when he found it close to impossible, even when the other children finished minutes before him, even when he dropped the ball so many times – he picked it up, pulled up his sack, kicked the ball again and kept on going, every time. He finished every single race. And when the morning’s activities were finished, when the prizes were given out and he beamed with delight at his shiny gold medal and certificate for taking part, the ache in my chest transformed into pure exultation. The tears flowed freely then. It is a day that will live in my memory forever – so filled was it with ecstasy and despair.

It is difficult to explain to someone who doesn’t know my boy; to someone who isn’t the parent of a child with special needs. But my son showed just how much the taking part *is* the most important thing, how strength and bravery and character can be found in not winning.

And I could not have been more proud of him than if he had won every single race.

Founder at Someone’s Mum
Danielle is an ex-English teacher living on the Gloucestershire/Worcestershire border in the U.K. with her husband and young family. She has two children—a boy, nearly 4, who was diagnosed on the autistic spectrum when he was 2, and a daughter, who is 19 months. She blogs about general parenting topics, as well as her experience with autism and issues surrounding teaching, at Someone’s Mum.

The WWE Wrestler With a Heart of Gold

The Day I Understood My Daughter’s Stim
Scroll to top