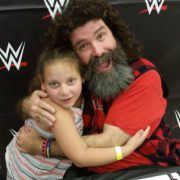 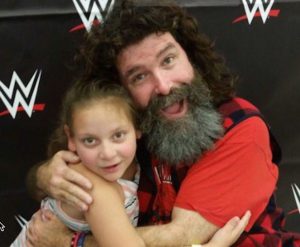 While wrestling fans have heard of WWE Hall of Famer Mick Foley, they might not know that he’s got a heart of gold that might be even bigger than his in-the-ring persona.

As proof of that, Mick posted this story on his Facebook page yesterday. At first, he said, he didn’t want to share it because he didn’t want it to look like he was “pointing to myself and saying, ‘look at me.’” But then both Julian Maha, the founder of autism resource KultureCity, and Ally Colon, the mother of the little girl in this story, encouraged him to share the story so that “it might shine a more positive light on autism.”

Mick was signing autographs at a meet-and-greet where Ally and her children waited four hours for a change to meet the wrestler. It turned out to be totally worth the wait—especially for her 6-year-old daughter Arianna, who has autism. Here’s the letter that Ally sent to Mick:

“I have to take a moment and speak about a man who today made such an impact on me and to whom I will forever be eternally grateful. Today I spent the afternoon waiting on a long line in the grueling heat with my children for 4 hours so they can meet WWE Hall of Famer Mick Foley. We stood and watched as person after person walked up, spent a minute or so with him and posed for a picture in front of the table he was sitting behind. Finally, it was our turn to meet and Arianna begins to become nervous and shakey. Her anxiety of meeting someone new was kicking in and her eyes began to fill with tears. She suddenly was afraid and didn’t want a picture. She just wanted to leave. I talk her down and she poses in front of the table just as the people before her.

At that moment the unthinkable happens. This amazing man, leans in and kindly asks if she is on the spectrum (without saying those exact words but I knew what he was saying). I politely answer yes and explain how different Arianna is and how she finds comfort in hugging new people as a sort of way of introducing herself. He immediately says “I knew it! I sensed it.” He points down to his bracelet that says Autism Awareness and says, “Would it be okay if she hugged me?” I immediately began to tear up. He understood. He didn’t give the dreaded “look” or get annoyed we were holding things up.

When I asked Arianna if she wanted to hug him her face lit up and she said “YESSSSS.” She jumped into his arms and hugged him. Played with his beard. Even asked where his Socko was. At that moment I began to silently sob. He got it. He knew and was without judgement and in complete understanding. He then takes even more time to write down the information he had about an organization he recommended I contact. At that moment he wasn’t a celebrity. He was an understanding parent whom looked at my child and felt everything I felt. This is a moment that will stay in my heart. Because of him, my daughter has a memory that will never be shadowed by judgement and negativity. Instead, it was a day my 6-year-old daughter will forever remember as ‘The day I met Mick Foley.’”

Arianna told her mom that hugging Mick felt like “a fuzzy ball of rainbows.” We can totally see that—what a great guy!

Life’s a Beach, at Least for a Day