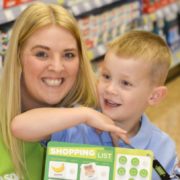 Food shopping with kids in tow is typically not easy, and if those kids are prone to sensory overload or meltdowns, it’s all that much harder. Many supermarkets and grocery store chains have rolled out “quiet hours” in the last few years to help those with special needs shop in a less-challenging environment, but the hours don’t always coincide with times of day or days of the week that families can actually get out and shop.

Asda is one of those chains that trialed a “quiet hour,” but only in some of its stores. Now Asda is rolling out something new to all of its locations—Handy Little Helpers shopping lists.

The lists were designed by Jenny Barnett, an employee at Asda’s Middlesbrough store. Jenny’s five-year-old son, Charlie, has non-verbal autism, and his school uses symbols and pictures to help him communicate. This inspired Jenny to come up with grocery shopping lists that used symbols and pictures to keep children engaged while their parent or caretaker shopped with them.

The Middlesbrough location successfully trialed the Handy Little Helper lists, and Asda decided to stock them at all of their supercenters and superstores (more than 300 locations). Each store carries 10 of the reusable lists—which also feature a clip to secure them to the shopping cart—and they can be found at the Customer Service desk. Although they were originally designed for children with autism, anybody can use them.

As for Jenny, she’s absolutely thrilled that her idea will help other children like her son. “It’s such a nice feeling that I can walk into an Asda miles away from Middlesbrough and see another child benefitting from my idea—it’s going to help so many children, which is great.”

I’m Autistic, and This Is Why I Dread Haircuts

School Creates a Beach for Autistic Students
Scroll to top