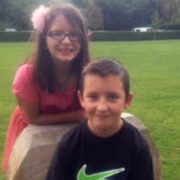 Growing up, I knew I wanted children—a family of my own where I could let my children know that they were loved and always be there for them (somewhat opposite to my upbringing).

I met my hubbie as a single mum: two became three, then became four with the arrival of T, and then five with D’s arrival. I felt complete.

Bearing in mind that T and D were 18 months apart, it was a busy time. I’d either be balancing one on each hip or smiling as my little “pack” followed me everywhere, leaving behind a trail of Match Attax cards (in T’s case) or play food and Playmobil characters (in D’s).

And then something unexpected happened. Teachers at D’s nursery recognised within her first term that her speech, social skills and ways of doing things were far behind her peers. We investigated online ourselves whilst waiting for the first of many appointments and one word came up again and again—Autism.

D’s official diagnosis came when she was 4.5 and T was 6. It was an unfamiliar path we travelled as we journeyed from grief (for the child we wouldn’t have) to fierce protection of our frightened little girl who suddenly had this “label,” one that she would always carry.

It was hard to explain to T about his sister. We took to saying that our brains were made of puzzle pieces and, with his sister, hers overlapped in some places (areas) and had a bit of a gap in others. It seemed to help him; he’d see D melting down or becoming extremely anxious and say, “That’s her puzzle piece doing that, isn’t it?”

(I used this puzzle piece scenario before I was active on social media and realised that puzzle pieces seemed to be used by a lot of autism organisations. It made me think, “Jeannette, you’ve got this, now do more to get awareness out there.”)

There were times when I sensed that T felt embarrassed. For example, if he was eating lunch in the hall at school and D was refusing to come in because she was overwhelmed by sensory issues. There were times when there’d be a sports day or assembly and I felt torn between the two, wondering whether to comfort my overwhelmed daughter or watch my son compete. In a way, it felt easier on T that D received her SEN statement and moved to an SN school. We wanted him to enjoy school life without feeling over-protective towards his sister all through his school day, because he did.

When T was diagnosed with high-functioning autism at age 10, it was more of a relief than a surprise. His traits were becoming increasingly apparent in public, and however much he masked them during the school day, he was having issues with fellow pupils and teachers.

So, my determination to raise awareness and acceptance of autism doubled.

Having two children on the vast autistic spectrum isn’t always easy. At times I feel like I should have a referee’s whistle, but that wouldn’t work: T would respond quickly (as his passion is—and always has been—football) but the sudden, sharp, shrill noise would terrify D.

I can’t say they’ve ever really “played” together. Whether it’s an attempt at a board game or a splash in the pool, T will always make it competitive, try and guide D into a contest, and then get frustrated and annoyed when she doesn’t want to or melts down. It’s at those times that I hanker briefly for the traditional “Oxo advert” family, the children all smiling around a table, eating the same food and cracking jokes. But it’s only briefly, mind.

It’s not all doom and gloom, of course. D might not “get” traditional jokes and humour, but she absolutely loves “Keeping Up Appearances” and “Mr Bean,” even though she’s watched them so many times she knows exactly who will say what and when, slapstick humour obvious . T is more droll and more sarcastic in how humour and tone. He also does a pretty fantastic withering glare, which more-often-than-not is aimed at his sister, if he disapproves of something.

But, they have each other’s backs and are extraordinarily protective of each other, even if it’s not always shown.

I love them both, and am so proud of them and the daily challenges they face.

An Autism Mom’s Feelings About Grief

Five Things Only an Autism Parent Would Understand
Scroll to top