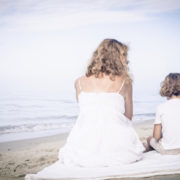 I told my autistic son this during his first trip to the ocean. The vastness of the water frightened him and so, in his own way, he sought to control it by holding out his little hands and bravely shouting at the waves to stop. We’ve all been there, struggling to get our footing when the riptide moments of life threaten to pull us under.

Never is this truer than when someone you love is dying. This summer, my family is preparing to say goodbye to my father-in-law, the kindest and most hardworking man I’ve ever known. Over the last few days I’ve worried about and watched my sweet boy struggle once more to stop the tide. Except this time it’s the vastness of his emotions that frightens him.

People with autism are so often portrayed as lacking emotions. But my boy is often flooded with them, to the point that he nearly drowns. When this happens I wade through the murky depths of his feelings and try to help him stay afloat. This isn’t easy these days since half the time I feel like I’m drowning, too.

Grieving with a special needs child, like anything else, seems so much harder. The meltdowns, the overstimulation, and the judgmental stares of strangers heighten the moment. Add to that the common struggle of helping your child make sense of something that you yourself don’t understand. I wish I could impart some kind of wisdom to other parents out there that, like me, are treading water in the sea of grief, but I sadly don’t have any answers.

Instead, I want you to know you’re not alone. In the chaos it’s easy to feel isolated. All the things that make your child’s day easier—staying on schedule, eating healthy meals, and having a routine—are nearly impossible in these situations. It’s easy to panic and flail as you frantically try and get some semblance of control over your universe.

It’s OK if you stumble and fall along the way. Saying goodbye is hard and it should be. But it’s important to remember that when you struggle for control, you risk drowning. It’s only when you lay back, trust the water, and float that the tide brings you safely back to shore.

The Autism Community: A Community of Strength

Siblings on the Spectrum
Scroll to top