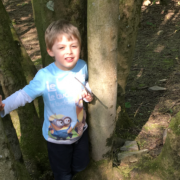 On a day not too long ago, Ethan and I were waiting in a queue at our local supermarket to check out. The time came for Ethan to hand over the box of strawberry ice cream cones that had been occupying him while I double-checked the list and unloaded everything onto the conveyor belt. Like many children with autism, Ethan has a tendency to become fixated by certain items and toys, and this box was one of them.

I braced myself for what I knew was coming next. Quietly and patiently, I tried to explain to Ethan that he had to give the box to the cashier, and then he would get it back. At that time we didn’t yet have a diagnosis for Ethan, so we didn’t have all of the tools that we do now to help Ethan understand the situation more clearly. All I could do was take the box from Ethan and give it back to him mid-meltdown.

This situation would usually end up going one of two ways: Ethan would either be too distressed during his meltdown to notice that he had been given back the box, or he would become his usual bouncing and smiling self, reunited with his box once more.

During that time, an older lady had appeared behind us in the queue. I suddenly felt very self-conscious, and mentally prepared myself for what I just knew she’d say. And she did.

“Oh dear,” she laughed. “You’re spoiled, aren’t you? You’ll get it back in the minute.”

I heard the words leave her mouth and enter my ears, and wondered who was she to think that was OK to say them to someone she didn’t know and knew absolutely nothing about. I took a second, and a deep breath, and turned to face her.

“Ethan is autistic. He doesn’t understand certain situations in the same way that other children and adults do. He is the most loving, gentle-hearted and kind child you could wish to meet. He isn’t spoiled; he’s just different. Don’t judge him–you don’t know him or us.”

I turned back to Ethan who, by that point, was happy he had his box back.

For now, Ethan is totally oblivious to the comments or judgements that are made by strangers around him. I feel compelled as his mother and protecter to shield him from strangers’ rude and negative comments, especially on days like the one I’m describing. I will carry on doing so until he is capable of doing it himself.

Do I still get self-conscious? Of course! As a parent, it comes with the territory. But my response has changed, as I’ve learned to let people’s rude comments go over my head.

Don’t get me wrong–some days I have to try really hard not to let someone’s comments bother me or affect how the rest of our day goes. But I know my son, and I know how he thinks. The thoughts of complete strangers are irrelevant to our family. As the age-old saying goes, “If you haven’t got anything nice to say, say nothing at all.”

Think before you speak. No two families are the same, and everyone’s journey is different.

Don’t judge us on our unique journey through life. Instead, we appreciate understanding faces and unlimited smiles. As another saying goes: “It takes 10 muscles to smile, but 100 to frown.”

Founder at Mummy Logs
Charlotte is mum to a little boy who has autism. When they're not taking on the world, one day at a time, they can be found baking, reading stories and playing with Play-Doh. Coffee and cake are the answer to all of her problems; along with reading, shopping, blogging and laughing out loud.

‘Wow! My Autistic Child Is Socializing!’