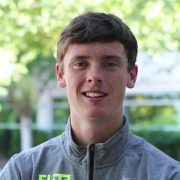 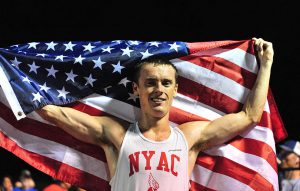 UPDATE 9/14/16: Mikey has won the gold medal in the men’s T20 1,500-meter race at the Paralympic Games in Rio de Janiero. Yesterday morning, he crossed the finish line with a comfortable four-second lead ahead of the closest competitor. Once again, he came in under four minutes, with a time of 3:51.73–this is nearly six seconds faster than his earlier best time at the Sir Walter Miler in Raleigh. Each win, along with each faster time, brings him closer to a shot at the gold in the 2020 Olympics. We’re all rooting for him!

When Roger Bannister first broke the four-minute mile in 1954, it was like the shot heard ’round the world. Since then, the four-minute mile has become less of a big thing, and more the standard for male middle-distance runners. So when 19-year-old Mikey Brannigan came in seventh place with a time of 3:57.58 at the Sir Walter Miler in Raleigh, North Carolina, on August 5, it was really no big deal. Or was it?

It turns out that Mikey, who has autism, is the first athlete with a T20 Paralympic classification to break the four-minute mile barrier.

Many individuals with autism and their parents disapprove of the term “disability.” However, the Paralympics needs to classify its athletes for competition and uses the World Health Organization’s definition of intellectual disability: “A significantly reduced ability to understand new or complex information and to learn and apply new skills (impaired intelligence).” Athletes competing in the Paralympics intellectual impairment sport classes must have:

Mikey was diagnosed with autism when he was 18 months old, and didn’t speak until he was 5. He was in fourth grade when he first started running with the Rolling Thunder Special Needs Program in Long Island, and discovered he was both good at running, and had the discipline needed to excel at it.

After graduating from high school, Mikey was “highly sought after” by many collegiate running coaches. Unfortunately, he was unable to meet the NCAA’s academic requirements to run at the Division I level. He currently attends a community college and runs for the New York Athletic Club, with support from Team USA. According to his mom, they hope for him to complete in the 2020 or 2024 Olympic Games.

In the meantime, Mikey will be running the T20 1500-meter final at the Paralympic Games in Rio in September. Go Mikey!