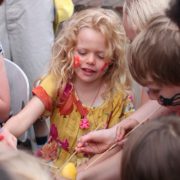 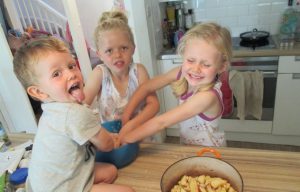 It’s been just over a year since my 7-year-old daughter’s high-functioning autism diagnosis, but the writing was on the wall long before it was official. Between autism and having three kids in four years, it feels like I’m a completely different person than the one who embarked on motherhood in 2009. I’m still very much a novice training on the job, and when it comes to autism I’ve had to learn plenty of lessons the hard way. Here are a few of them.

Most meltdowns and episodes of ‘bad behaviour’ stem from anxiety.

It took me a while to figure out that, every single time Polly acts up, there is a deeper reason. As all autism mamas and papas know, meltdowns are not the same as temper tantrums—they come from a feeling of being overwhelmed by life. The best way to stop meltdowns is to get really good at identifying your child’s triggers.

When Polly feels upset or anxious about something, she will often start lashing out at her younger brother and sister. If my husband or I manage to step in early enough, we can nip it in the bud before it escalates. That way we have the best chance of calming our girl down before she’s too angry, and figuring out what’s really bugging her.

Letting the little things go will help create harmony for the bigger picture.

I often joke about how much my standards have dropped in the last few years. I was full of ideas about how things would be when I had a family BEFORE I had children. With each new addition, my ideals have loosened up. I don’t plan too far in advance these days, and I’m a whole lot more flexible than I used to be.

I never hesitate to cancel plans, or change things at the last minute, if I know the original plans are going to cause us problems. I’m also OK with preparing three or four different versions of dinner, because I would rather my kids eat than bash my head against the wall while they refuse to have the sauce on a casserole, or the extra veggies I’d ideally like them to have on the side.

I’ve always been a huge believer in trusting my gut, and when I do, it doesn’t let me down. On the odd occasion that I have gone against my instincts, it has been an absolute disaster.

It makes me sad to think that we sent Polly back to school after summer last year, when I knew in my heart of hearts that she’d be better off at home. She only went back for seven weeks of the new school year before we decided that home education was the right path for us, but it was seven weeks too many. It’s taken us a long time to undo the damage those extra weeks caused.

Don’t be afraid to adapt and change, as often as circumstances dictate.

If you’d have told me a few years ago that I’d end up home-educating Polly, but sending Clara to school, I would have laughed. But that’s exactly how things have panned out. The simple fact is that Polly is the one in our family with additional needs and, as with all three of our kids, we have to constantly ensure that those needs are being met. Having both girls at home just wasn’t working, and as Clara is the type of child who will more than likely thrive at school, that’s what we’ve done. I say more than likely because it’s not even been a month yet, and the jury is still well and truly out.

There’s a brilliant Grace Hopper quote that I adore: “The most dangerous phrase is: This is the way we’ve always done it.” My husband and I are always on the lookout for ways to improve family life. It often requires digging deep, and assessing ourselves as much as the kids, and that can be a bitter pill to swallow. However, the power of positive change cannot be underestimated.

Be sure to give them a loving push.

I stand firmly behind what Temple Grandin has said about lovingly pushing autistic kids out of their comfort zone. A couple of years ago, Polly was tripping over her own feet as she walked, and could barely cross her legs. So we enrolled her in a weekly gymnastics class, and started encouraging lots of OT activities at home (including setting up a mini trampoline in our living room). Now she can confidently run and skip alongside her friends. She was scared of the idea of taking the stabilisers off her bike, but after a full day in the park dedicated to her learning to ride on two wheels, she got the hang of it. Polly was terrified of the mere idea of swimming without armbands, but after lots of practice, she is becoming a very proficient swimmer.

While Polly often feels fear a hundred times more than her sister, or other kids her age, she does something anyway, and her hard work eventually pays off. I couldn’t be prouder of her.

Founder at Mummy Tries
Reneé Davis blogs at Mummy Tries about the ups and downs of parenting with her young family. Her husband Andy and children Polly (7), Clara (4) and Freddy (2) are her main sources of inspiration.

The Smith Brothers Use Boxing to Help Spread Autism Awareness