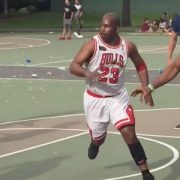 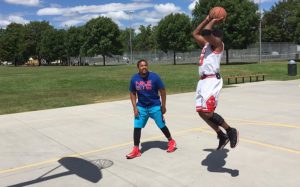 Back in the beginning of July, a video of Jeffrey Harrison in Coeur D’Alene, Idaho, went viral. The video showed him playing a pickup game of basketball, dressed in Michael Jordan gear from head to toe—the jersey, the shorts, the sneakers, and even the sweatband on his left arm and compression sleeve on his left leg. Local news channel KREM (a CBS affiliate) picked up the story the next day, along with ESPN and other media outlets. Social media dubbed Jeffrey the “CDA MJ” (Coeur D’Alene Michael Jordan) and Twitter users posted various videos and photos of Jeffrey playing his favorite sport, dressed in one of his three complete Jordan outfits.

What people didn’t realize at the time was that Jeffrey has autism and basketball helps him cope with the world around him. Now 33, Jeffrey has been a basketball fan since the age of 4, and especially a Michael Jordan fan. He’s unable to work, and spends a lot of time playing basketball in pickup games around the area of Coeur D’Alene and Spokane, Washington, as well as watching old videos of Jordan to learn his moves.

Jeffrey told KREM that he always has fun playing basketball, and he takes it very seriously. He also mentioned that people aren’t always nice to him, but that he never lets it “defeat him.”

His close friend, Alfred Byrd, said that people laugh at Jeffrey, teasing him and calling him a Jordan “wannabe.” Alfred has seen his friend of 20 years struggle with his autism, but says that Jeffrey is “always striving to succeed on what he wants to be in life.”

After sharing the original story, KREM Sports Director Darnay Tripp contacted Jordan’s business manager to pass along Jeffrey’s information. Jordan’s response was to send two boxes full of Jordan gear to Jeffrey last week as a “thank you,” along with a personal note telling him to: “Continue to believe in yourself, play hard and always remember to enjoy the game.”

Just in Time for Back to School: Check Out the Nesel Pack
Scroll to top