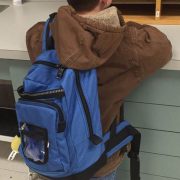 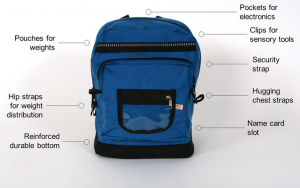 Back-to-school time often means new school gear, including a new backpack. Check out this Nesel (pronounced like “nestle”) Pack, designed by six college students at the University of Minnesota for children ages 6-12 with autism.

Last year, as part of their year-long “Entrepreneurship in Action” course, the students were required to come up with an idea for a start-up. The team thought about ways in which they could help kids with developmental disabilities and, according to the Kickstarter page, the team came up with the idea of the Nesel Pack.

To address sensitivities that many individuals with autism have, the Nesel Pack creators put widening straps on the pack that feel like a hug and give the same security as a compression vest. The straps are soft on the inside, so they won’t hurt the wearer’s skin, and they are also long enough for a caretaker to hold onto if necessary. Weights can be put in inside pockets, and the pack features several clips to hold things like toys, fidget tools, items to chew on, and more. There’s a name tag slot that can also hold a photo, and the bag has a reinforced bottom made from ballistic material for durability. With dimensions of 15” x 11″ x 5 ½”, the bag can fit both an iPad and a 14-inch laptop.

The student team initially featured their invention on Kickstarter and raised more than three times their initial financial goal of $10K in just the first week. That allowed them to start production on the backpack, which retails at $115. Because it’s built to last, as well as stand in for a weighted vest, the Nesel’s creators feel that it’s worth the price. However, the students recognize that the price tag for the bag puts it out of reach financially for many families that might benefit from it. They say that they’re actively looking both at ways to reduce the cost and ways to fundraise in order to help with donations of the bags in the future.

While no official studies have been done as to the scientific benefits of the backpacks, there has been great anecdotal feedback on the Nesel Pack from those that have tested and used it.

For more information, please check out the Nesel Pack Kickstarter page or website.

Michael Jordan Tells Fan to ‘Continue to Believe in Yourself’

Her Daughter Was Fixated on This Shirt. When It Wore Out, She Took to the Internet...
Scroll to top