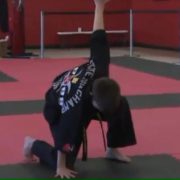 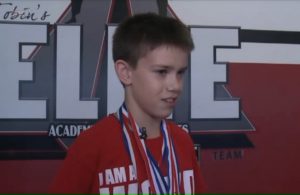 Ethan Fineshriber was diagnosed with autism at the age of three. As he got older, he did well academically, but not socially. “He basically had no friends,” said his mom, Mara. In order to get him to exercise, and to interact and engage with other kids, Mara enrolled Ethan in Taekwondo classes.

Ethan was interested from the first day, especially with the stuff he could learn and memorize. “He felt more confidence about himself,” said Mara, “and it helped him kind of come out of his shell.” Pretty soon, his instructors recommended that he consider competing in the sport.

Ethan started competing in national competitions and winning them. He then set his eyes on the Taekwondo World title. After three years of training, 11-year-old Ethan won the ATA World Championship with a nearly perfect score of 999. “I felt nervous that I wasn’t going to win, but I thought I had a chance.” said Ethan. “Then the judges called the number and everybody around me went insane.”

His friends, explained a tearful Mara, rushed the ring and hoisted Ethan onto their shoulders. “They hugged him and congratulated him and shut the ring down.” It was a dream reached not just for Ethan, but for Mara too: Her son had gained confidence and more friends than she could have imagined.

And Ethan’s not done yet—he plans to keep training, and keep winning Worlds.

Thankful for the Kindness of Strangers

‘Wow! My Autistic Child Is Socializing!’
Scroll to top