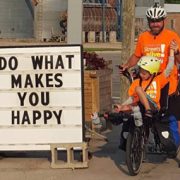 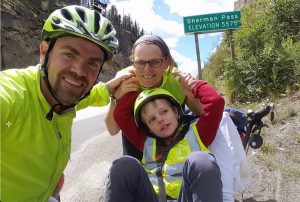 I recently came across the Facebook page for Travis, Fiona, and Patch Saunders, an Australian family currently cycling across America. Patch, who is 7 years old, has autism and is largely non-verbal.

Patch was diagnosed at 21 months of age, and has received a wide array of different therapies in the time between then and now. As his parents explain on their blog—School of the Road—his “greatest leaps in learning have come from combining teaching with his love of movement.” He is what is known as a kinesthetic learner. Hence, the road trip, which will address Patch’s “love of the outdoors and curiosity about new environments.” The School of the Road curriculum for Patch will be determined by his interests, and what they see and do as they go along.

As Fiona explained in an interview, “So often there is a concentration on what your child can’t do,” Fiona said. “We want to give Patch the sense that he can do anything.”

The trip started in mid-July in Anacortes, Washington, and the family plans to finish up in Washington, D.C., by October. Along the way, they’ll cycle through Washington, Montana, North Dakota, Minnesota, Wisconsin, Michigan, Ohio, Pennsylvania, Maryland, and West Virginia, for a total of 5,000 kilometers. Travis is pedaling a specially designed semi-recumbent bike with Patch in the front, while Fiona is riding alongside on her own foldable bicycle. 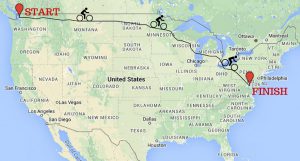 They’ve already traversed some amazing scenery, including the famed Going to the Sun Road in Glacier National Park, Montana and assorted high mountain passes. Videos and photos on their Facebook page tell an amazing story, complete with bison, the kindnesses of many strangers, and a lot of love.

Their goal is “to build Patch’s experiences as they camp in the wild, meet new people, and most importantly show him anything is possible.” Although they’re just a little more than halfway through the trip, I’m pretty sure they’ve already met that goal. Amazing.

The Lion in the Living Room: Making Sense of the World