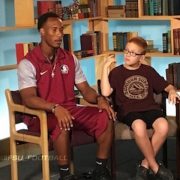 The feel-good photo of the week has got to be the one of Florida State University wide receiver Travis Rudolph sitting at a lunch table across from 11-year-old Bo Paske, a student at Montford Middle School in Tallahassee, Florida. The photo, and accompanying story, went viral after Bo’s mom posted it on Facebook on Tuesday, to express her gratitude to Travis.

If you remember anything about the middle school years, you likely remember it as a time of change and, possibly, confusion. Peer groups change, education becomes more intense, hormones start raging, and the lunchroom becomes a minefield. Bo, who has autism, spends some lunch periods sitting with friends, but during most of them he just eats his lunch alone. His mom said, “he didn’t seem to mind,” but it hurts her deeply.

Travis was visiting the school with some other FSU Seminoles players as part of their community outreach program. After grabbing a couple of slices of pizza, he saw Bo sitting alone and asked if he could sit down at the table. As Travis explained to the Orlando Sentinel, “He started off and was so open. He told me his name was Bo, and how much he loves Florida State, and he went from there…He was a really warm person.” Travis really didn’t think much of it.

Until later, when somebody showed him what Bo’s mom had posted on Facebook. It read, in part: “I’m not sure what exactly made this incredibly kind man share a lunch table with my son, but I’m happy to say that it will not soon be forgotten… This is one day I didn’t have to worry if my sweet boy ate lunch alone, because he sat across from someone who is a hero in many eyes. Travis Rudolph thank you so much, you made this momma exceedingly happy, and have made us fans for life!”

Travis was moved by the post, and told ESPN: “I was just a kid not too long ago and I remember what the impact was of guys that played in college and in the NFL coming back to us…. So I feel like maybe I can change someone’s life or I can make someone a better person or make someone want to be great or be like me, or even better.”

Before he left, Travis signed Bo’s lunchbox. When his mom picked him up from school, Bo told her, “Mom, I’m famous!” And that was before the Facebook post went viral. The next day, his lunch table was filled with girls.

An Adventure of a Lifetime: Cycling Across America