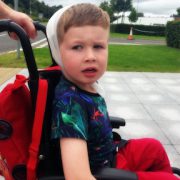 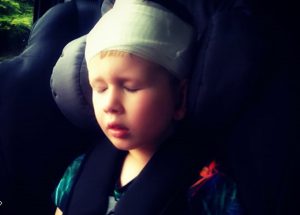 A high pain threshold can be common when your child has autism or, in fact, any special need. And it can be both a blessing and a curse.

While we used to have those soft corner fittings for the table that you can buy to soften the blow from such incidents, we admittedly didn’t have them on the table because Broday just continually pulls them off (and chews on them). The mummy guilt from this was an added bonus to the whole episode.

We saw it happen in slow motion, like you always do with accidents. He lay there, wedged between the sofa and the wall. He raised his hand and held his head, but there were no tears. In fact, there was no big reaction at all. His Daddy scooped him up to assess the damage and then my heart crept into my mouth when I saw his head bleeding.

Enter panic and adrenaline. We rushed to the hospital and four impatient hours later—filled by crisps, biscuits and a temporary loss of sanity—we were home with a glued and bandaged-up head.

During the entire episode, Brody didn’t cry once. And it was a cut that would make your stomach churn. It was traumatic for us, but it was just inconvenient for him. His biggest frustrations were his dad holding a towel to his head until the First Response car arrived, and the boredom of waiting…waiting…waiting at A&E. In times like this, I am massively grateful that he has such a high pain threshold. Because to feel the pain from that cut would have been awful.

It also comes in handy because Brody has low muscle tone (hypotonia) and hypermobility. These two conditions, combined with a lack of spatial awareness, means he falls or bangs into things a lot. He is always covered in bruises, but he rarely complains when he falls. A lot of the time if he hurts himself when we’re not looking, we don’t even know about it until we see a mark appear or a bruise. I swear my child can injure himself in the blink of an eye. Sadly, he has no danger awareness whatsoever and because of that, I am your classic helicopter parent. Yet I still miss a lot, or don’t react quickly enough (there’s that mummy guilt again!).

While there are advantages to a high pain threshold, there are, of course, some downfalls.

A big worry for us is that our beautiful boy might really hurt himself and we would know nothing about it—especially as he is non-verbal and wouldn’t be able to tell us. I worry about how he might suffer in silence and it makes me feel awful, not to mention how bad it makes us look as parents. After all, who doesn’t know when their child is hurt?

Brody’s high pain threshold makes us panic if he ever cries. Because he rarely does, we figure if he’s upset he must have really hurt himself or be unwell. Of course, this isn’t always the case, but it’s a real worry for us.

A current problem is Brody has started stimming by crawling across the carpet with his forehead against it. He has “carpet burned” his head on numerous occasions and has remained completely unaware that he’s done so. The same goes for head banging, which he doesn’t do so much anymore, thankfully. He just doesn’t appear to feel it.

So, I have mixed feelings about that high pain threshold. It can scare the life out of me but, admittedly, it can really come in handy sometimes, too.

Founder at Brody, Me & GDD
Laura is mum to Brody & Sydney. Brody is primarily undiagnosed with autism, GDD, epilepsy, SPD, hypotonia and hypermobility. She writes about their life on her blog Brody, Me & GDD.

Laura is currently campaigning for bigger nappies for children with additional support needs, with a petition here. She also wants to raise awareness for Changing Places toilets through social media.

What Autism Has Taught Me About Friendship

Looking Back: What I’ve Learned Along the Way
Scroll to top