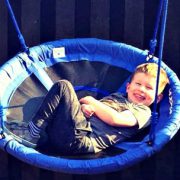 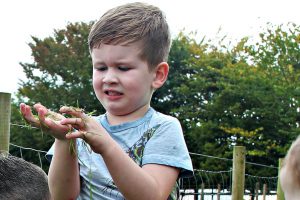 I never knew about sensory issues before having Brody. I wouldn’t have believed that a child could get so upset at the sight, touch, smell or sound of something — if that something wasn’t typically upsetting.

Brody’s sensory issues were visible before we even knew what they were. When he was weaning as a baby, he would often gag at the sight of food to the point he would vomit and refuse to eat. When we went to play groups, he would retch when he saw other children eat grapes and bananas. When I gave him cooked coloured spaghetti to play with, he looked at me in sheer horror, repulsed. He threw up at soft play once after touching stringy sensory lights and on one occasion was sick touching wet washing that had come out of our washing machine.

It sounds so silly, but I used to put it all down to reflux. Because his doctor put pretty much everything down to reflux back then — his delays and his daily vomiting.

It was only as time moved on — when we realised that Brody had various disabilities and I had the opportunity to meet more doctors, therapists and mums walking similar paths—  that I discovered sensory issues was a thing. And that it was known to many as sensory processing disorder (SPD).

Apart from the fact that it upsets my beautiful boy, the thing that really frustrates me with SPD is its unpredictability. There is no consistency, so I can never call it.

SPD can make me out to be a total liar to those who don’t understand its ways, which, let’s face it, is most people. One day, Brody won’t eat something. He’ll recoil at the touch of it and push it away, starting to gag. A few days later, someone will offer him the exact same thing. It could be a banana, a chocolate biscuit — anything. I’ll explain the situation to them and then he’ll quite easily take it from their hand, have a bite and treat it like it’s the nicest thing he’s ever tasted.

SPD can make simple things at home a nightmare. Some days I can vacuum our living room whilst Brody sits on the sofa and he doesn’t even flinch. Other days he screams as soon as it’s turned on and throws the nearest object in protest — usually towards me. If someone in another room uses the handheld vacuum, you need to be really careful that he doesn’t hurt himself or someone nearby as soon as he hears it. Needless to say, we usually try to just vacuum when he isn’t in the house.

SPD can let its presence be known anywhere. Sometimes we can put petrol in the car and it is no big deal. We’re just like any other family filling the car up. Other days, just turning into the petrol station, knowing that that the noise of the tank being filled is coming, is enough to make Brody screech and cry — and believe me, he rarely cries.

SPD can make our favourite places hard to enjoy. Like our garden, which is the one place where we can just go outside that is safe and accessible for Brody. But sadly, his sensory issues mean that we never know how he’ll react when we step out the back door. It could be the sound of a lawnmower a few houses down, the wind or something like the touch of the sand in the sandpit. When he was a toddler he used to gag when his bare feet touched the grass. Thankfully, that one stopped, as it was as tricky as it sounds!

SPD can ruin family days out for Brody. We can be eating in a restaurant where he’ll suddenly gag because of the food we’re eating, so we need to leave. Or he can be enjoying soft play and someone turns on a coffee machine in the background and he is instantly distressed.

Don’t even get me started on hand dryers in public bathrooms.

SPD is hard on everybody, but especially Brody. I can’t even begin to imagine how hard it must be for him. Because he is non-verbal with a learning disability as well as autism, sometimes we just can’t guess what it is that is upsetting him. And that’s so tough for us all.

Over the years, some of the things he has struggled with because of SPD have improved somewhat. He never used to be able to tolerate sitting and eating with other children at all before he went to nursery. Now he sits with children every day and manages so much better. He will still gag occasionally, but it’s hard to know if it’s because of sensory issues or because it’s his way of saying “no.” Nursery has helped him so much.

One thing that is almost always consistent, though, is that a cough and cold brings it tenfold. Being unwell rarely doesn’t affect him when it comes to the sight and touch of even his favourite foods.

We’ve learnt to accept that we can’t predict sensory overloads. That some days everything will be fine, and other days things will be more difficult. But I don’t know if its unpredictability will ever not be frustrating for us — especially Brody. Because, naturally, we just want him to be happy and enjoy simple things. And SPD has the power to prevent that.

Founder at Brody, Me & GDD
Laura is mum to Brody & Sydney. Brody is primarily undiagnosed with autism, GDD, epilepsy, SPD, hypotonia and hypermobility. She writes about their life on her blog Brody, Me & GDD.

Laura is currently campaigning for bigger nappies for children with additional support needs, with a petition here. She also wants to raise awareness for Changing Places toilets through social media.

2017 NFL Pro Bowl to Be Autism-Friendly

Autism: Don’t Force Me Into Your World Before You’ve Experienced Mine
Scroll to top