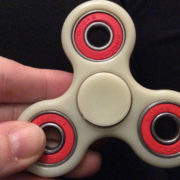 “Mum, it’s like everyone wants to be autistic like me now!” My 8-year-old daughter announced this as she came out of school on Monday.

She was referring to the latest “craze” for the fidget spinner in her school (and it seems every other school in the country). Suddenly it was “cool” to want to fidget, and if you didn’t have the must-have fidget toy, you were somehow the odd one out.

It did somewhat amuse me to think that after an entire month of autism awareness, all it actually took to make autism “cool” was a little handheld plastic and metal spinner!

It certainly seems to have made my daughter less stressed and self-conscious about her need to “stim” at school. Previously, it was rather obvious in her mainstream classroom which children had autism or ADHD, as they had access to special cushions, stress balls and tangle toys to help them concentrate or remain calm. While others were shouted at for fidgeting, a select few were allowed to “play” with these items at the teacher’s discretion. Having a fidget toy was something only children with a diagnosed condition were supposed to want or need.

Suddenly, all that has changed.

While this has the advantage of making children with autism feel more included and less isolated, perhaps even “cool,” it has some negative effects, too. 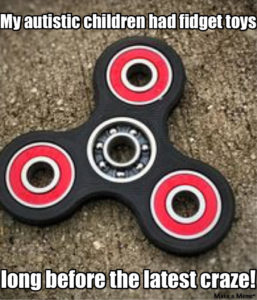 How do you decide which children just want a fidget toy and which children really need it? Should schools allow all children the opportunity to fidget and “play” in order to enhance concentration and productivity, or are fidget toys actually a huge distraction in the classroom setting?

In the U.K. and the U.S., a large number of schools have now placed bans on the latest craze of fidget spinners, claiming they cause problems in the classroom and are a health and safety risk. This is not the first craze schools have banned, of course, but this is perhaps the first time such an overarching ban has actually had such a negative impact on autistic students. After all, the manufacturers never set out for the toy to be used so casually by so many people, and it was, in fact, designed as a stress release for the autism/ADHD market.

My daughter would be devastated if her school introduced a similar ban. For her, the fidget spinner is not a must-have craze to be like her friends, but more a stress release from the demands placed upon her during her school day—much the same as she uses a stress ball or her twist-and-lock blocks. When schools decide to ban sensory and fidget toys, they risk isolating the very children they’ve spent years trying to include.

I am loving seeing my daughter play together with children in her class with a toy she is confident in and comfortable with. It is rare for a craze to include her, as she is usually socially unaware of what others are doing. To see her included of her own doing is beautiful. I love that the world is now seeing sensory and fidget play as “normal” and not something to be mocked or frowned upon. I love that the current “in thing” is now readily available in shops everywhere and very inexpensive. It requires no language and little skill, so everyone can join in.

But I worry too. I worry that schools are quick to react and ban everyone from using fidget spinners just because they are so popular. I worry that when everyone else moves on, my daughter will be the one left standing alone, still spinning her little handheld plastic spinner by the school gate and once again ignored by her peers. I worry that people will see her as just “playing” like everyone else and forget that, for some, these fidget items are a necessary stress release and stim.

Time will tell how long this latest trend lasts. For now, though, I can see my daughter’s point. It really is like everyone suddenly wants to be autistic. I am watching with interest in the hope this has a positive impact for awareness and acceptance of not just my daughter, but the rest of the autistic population too.

Parents Make a Mini Blockbuster Store for Their Autistic Son