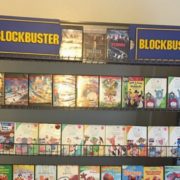 Blockbuster declared bankruptcy back in 2010 and even though DISH Network bought the last stores in 2011, most of us just assumed that all Blockbuster stores were long gone. But it turns out that there are still a few in Alaska and Texas.

Unfortunately, the one in Sharyland, Texas, also just closed its doors, and its closure has gotten Twitter user Jaavii’s 20-year-old brother, Hector, upset. Jaavii posted on the social media site that his brother, who has autism, “was sad that Blockbuster was closing down.”

But Hector didn’t have to be sad for long, as his parents built him his own “mini Blockbuster,” stocked with his favorite movies and cartoons. They even got a DVD rack topped with Blockbuster signs that they’d bought from the store when it closed.

While Hector is non-verbal, Jaavii’s photos show that his brother was happy and clapping with joy. Our hats off to these enterprising—and ausome—parents.

Let Me Shine: A Video