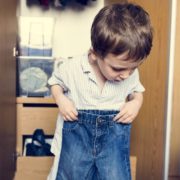 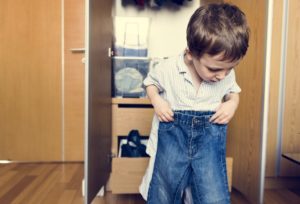 Recently, buying my child a pair of jeans almost caused me to have an anxiety attack.  For years, my son refused to wear them (read: meltdown). Instead, he wore activewear. Things with stretchy waistbands and breathable fabric. To the point that I thought that he wouldn’t wear anything else for the rest of his life.

Special needs kids all have a line they draw in the sand for things they are willing to try and things that they will flat out refuse no matter what. Whether it’s only eating yellow foods, or putting their clothes on backwards, or not getting dressed until their clothes are lined up neatly on their bed. When he was younger, I remember setting up my son’s clothes on his bed, just so, and some days I even let him go to school with his shirts and pants on backwards. Because moms have a line in the sand, too. I chose my battles carefully.

But things change. I don’t have to set out his clothes anymore and, for the most part, he puts them on right. Every once in a while I still have to ask him to turn his shirt around before leaving for school, but it’s no longer a line in the sand.

An in-home aide once told me not to try and create a world where he didn’t have meltdowns, but to raise my expectations of him … help him be prepared for an adult world that doesn’t allow for accommodations. It’s hard to do that, though, when the meltdowns last all day and night.

You try to figure out what things they CAN do for themselves and what things the autism and other associated diagnoses make nearly impossible to accomplish. Finding a way to help them cope and function outside the safe four walls of home is terrifying. And then, one day, you find yourself raising the bar because they’ve mastered that milestone. Or they raise the bar for you.

A few days ago, I found myself sitting in a changing room with my son while he tried on half a dozen pairs in search of the perfect pair.  I watched my growing boy making a big first step. I know … it’s just jeans. But it’s never just anything, when you have a special needs child. The losses always outweigh the wins. So when even small milestones are achieved, it’s reason to celebrate. Because each new step is a hard-won step.