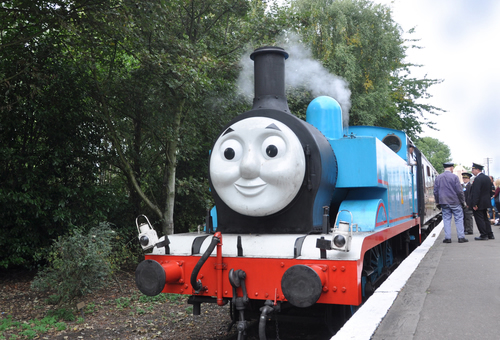 George Carlin. That’s what comes to mind when I think of Thomas the Train.

The man who first listed the “Seven Words You Can Never Say on Television” in a 1972 monologue.

Oh my, how far we have come.

Between George, Alec Baldwin and Ringo Starr, Thomas the Tank Engine is quite a celebrity for his voice overs but to a 9-year-old Thomas is so much more.

A Beatles Member – Beatle who?

When my son first started watching Thomas I thought it was like any other children’s show. One which would run its course and disappear a few months later. Oh, how I was wrong.

The little engine is part of my life more than I could ever imagined. A Day out with Thomas has nothing on what we do all year long.

Thomas is the king and you know what – he deserves to be king. In an age where video games often involve destroying something (or someone) and YouTube videos quickly spew many of those seven words George Carlin spoke about, Thomas is a pleasure.

So are Birdy, James, Harold, Sir Top Em Hat and the rest of Sodor Island.

Why this fascination I will never know.

But it could be worse. Much much worse.

At some point I have to explain the Island of Sodor is not real. Maybe I’ll do the Easter Bunny, Santa Claus and Thomas all on the same day.

or maybe I’ll leave that for Mommy.

Founder at AutismAwareness.com
A dad who simply wants to be the best he can. It doesn't get any simpler than that. Oh, and I love domain names, starbucks and sarcasm.

Autism. It Makes You Stronger.
Scroll to top