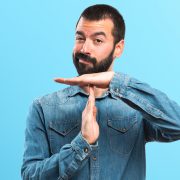 April is Autism Awareness month, and every year at this time I think about writing something. Typically, it never works out, as I get sidetracked by other ventures or just life in general.

This year, however, I think it’s important to address one issue we constantly see in the comments or discussions by those unfamiliar with Autism.

What an ugly word.

According to Merriam-Webster, ignorance is defined as, “the state or fact of being ignorant: lack of knowledge, education, or awareness.”

It’s a fair definition, but ignorance is often a two-way street. People are quick to often jump on others, without understanding the sentiment or experience behind their comments. After all, do you know what kind of day that person is having? Do you know anything more about why he/she feels that way? Are you biased towards how the situation would likely be commonly perceived?

Isn’t it ignorant on your part to just assume that person is ignorant, and dismiss them?

There are no winners in calling anybody ignorant.

Almost any attitude can be overcome with “knowledge, education and awareness,” and, of course, some kindness and patience. However, the step to overcoming has to begin with someone.

As a special needs parent, I have never really felt that anyone was ignorant. I have felt defeated, ignored and quite a few other words. I have also felt that I just don’t have the patience to deal with some people and it’s better to just wink and nod—after all, some people are just happy being miserable.

Once I use that word “ignorant,” however, it feels like I am simply stooping to their level and, well, that is not going to help anyone. Between personal and work responsibilities, there’s no time for this additional drama in my life. My hope is maybe one person will read this letter and stop using that word.

Try to educate someone. Do something to create more awareness. There is no need to use the word “ignorant.” It often just breeds more negative energy in your own daily life when the person who is assumed to be “ignorant” really probably doesn’t care anyway.

My favorite quote is by George Bernard Shaw – “Never wrestle with a pig. You both get dirty and the pig likes it.”

Place your energy in battles you can win or people you can educate, and try to remove this word from your vocabulary. You may be surprised how much better it makes you feel.

Founder at AutismAwareness.com
A dad who simply wants to be the best he can. It doesn't get any simpler than that. Oh, and I love domain names, starbucks and sarcasm.

Let’s Get Real About Autism
Scroll to top