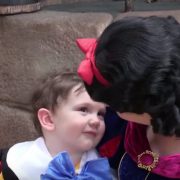 Many people swear that Disney World is the most magical place on earth, and for one little boy and his mom last month, it proved to be just that.

Two-year-old Jackson Coley was diagnosed with non-verbal autism about two weeks before the Coley family went on a trip to Disney World. Jackson’s mom, Amanda Coley, is no stranger to autism, as her middle son also has the diagnosis. He, like Jackson (known as Jack Jack), started out as non-verbal, but is now highly sociable. Amanda hopes that Jack Jack will grow the same way.

In the meantime, the little boy is friendly and sociable to his family, but fearful and quiet when among strangers. Until he met Snow White. Unlike with the other Disney characters, who Jack Jack pulled away from, he appeared entirely comfortable with Snow White. Amazed and elated, Amanda and her husband took photos and video of the heartwarming moment.

“To our surprise, he didn’t get up and leave,” Coley told TODAY. “He just suddenly melted and was perfectly content.” Once you watch the video, you’ll melt too.

Amanda originally posted the video on her Facebook page when the family returned from their Disney vacation, but after it was shared more than 6 million times, she shut it down. For privacy, she then decided to move it to YouTube, where it’s been seen almost another 3 million times.

And we’re not the only ones who love it—Jack Jack is a big fan too. According to Amanda, he loves to crawl into her lap when she’s at the computer, point to the screen, and use sign language to say, “More.” It seems his love for Snow White is still as strong as ever.

Socializing Mommy: The Need for Playdates

My First Lesson on Autism Came Too Late
Scroll to top