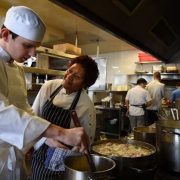 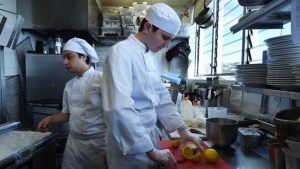 Every story about somebody successfully pursuing their dream is a story worth telling. When that person has to overcome more than the usual roadblocks to pursue that dream, their success becomes even more heartwarming. Such is the case with Jack Studholme, a 20 year-old living in Australia.

Jack, who has autism, just landed his dream job as an apprentice chef at Catalina, a very popular restaurant in Sydney. While he always liked to help out his mom in the kitchen, it was the completion of a hospitality certification at a TAFE institution (in Australia, TAFE institutions provide “technical and further education”) that opened the door to his future.

Social media also played a part—Michael McMahon, the owner of Catalina, first saw Jack’s photo on Facebook. Jack was dressed in his chef whites, receiving an award from the Cerebral Palsy Alliance’s (CPA) Transition to Work program, which assists people with various special needs. Next to Jack’s photo was the hashtag #hireme, and the social media plea worked.

Samantha Lawler, Jack’s mom, said that the Facebook photo had many wonderful responses, including McMahon’s. Jack interviewed with the restaurant management and then had a two-day trial, to see whether it was the right environment. It wasn’t easy for Jack at first—he had to overcome sensitivities to heat and noise, as well as the usual pressures of learning new skills and working in a busy restaurant’s kitchen. But he had help from the CPA, and his co-workers.

“We have around 34 kitchen staff here…and they have all taken him under their wing. Everyone loves caring for him and they respect him, which makes me really happy,” explained restaurateur McMahon.

Jack works three days a week at Catalina, under the supervision of the head pastry chef. He has various tasks, including making the daily bread from start to finish, washing salads, and plating. Jack is happy, as his mother explained: “Working at Catalina has definitely changed Jack’s life and has given him real belief in his abilities.”

It Was Never Just a Steak: Date Night as an Adult With Autism

Finding the Laughter in Autism
Scroll to top