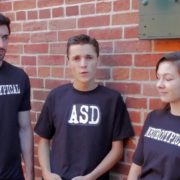 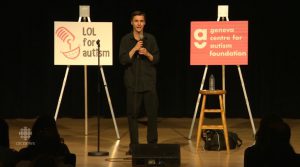 You’ve likely heard the expression, “Laughter is the best medicine,” more times than you can count. When it comes to his performances, 20-year-old Canadian Michael McCreary is counting on the fact that comedy really does make a lot of things better.

Michael is known as the “Aspie Comic,” and he’s been doing stand-up comedy routines since he was 14. In a profession that relies on a quick wit and making connections with strangers in a crowd, Asperger’s may seem like an improbable fit. However, Michael says that his autism provides the fuel for his comedy. “Comedy is one of the only mediums that turns failure into a strength — turns it into a weapon that you can use to entertain people.”

During tough times in grades 7 and 8, his parents encouraged him to write out his feelings in a journal. The journal soon gave way to any piece of paper he could find, and the venting soon turned into punchlines. As so many comics before him have also discovered, Michael realized that when he made fun of himself onstage, he could get the last laugh.

Michael describes himself as an extrovert, and compares some social situations to drowning, attesting that it’s hard to be surrounded by so many people every day and be unable to form a connection with any of them. His comedy helps him form that connection through laughter. While some may say the laughter is coming at his own expense, as he makes jokes out of some of his life experiences, Michael is only too happy to do it. “It’s less like a comedy show and more like group therapy,” he said.

Michael has performed more than 150 times, mainly at autism conferences, but is working on going more mainstream; to reach more people in his quest to redefine “normal.”

Recipe for Success: Young Chef With Autism Gets His Dream Job

His First Time at the Theatre
Scroll to top