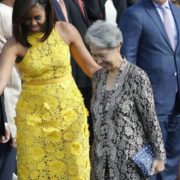 Even if you don’t care about the world of fashion or keep a scorecard on the various diplomats who visit the White House, chances are you’ll still be interested in this story. This past week, when the Prime Minister of Singapore visited President Obama, his wife Lee Ho Ching was photographed carrying a simple and fun dinosaur clutch bag designed not by a famous designer, but by a 20-year-old man with autism.

It turns out that Mrs. Lee is an advisor to the Pathlight School, the first autism-focused school in Singapore. The school has an Artist Development Programme (ADP) and the items designed by ADP students are featured at its Art Faculty, to “promote the special talents of people with autism and related challenges.” Mrs. Lee brought three purses designed by ADP students to the U.S. for her visit, deciding at the last minute to use the blue dinosaur bag designed by Sheng Jie.

While Sheng Jie’s parents were amazed that their son’s design made it into the international spotlight, his father said that his son doesn’t realize the impact that his design made. He explained: “He is just happy when we tell him someone likes what he’s made.”

Sheng Jie makes dinosaur designs right from his head, without relying on any pictures or photos. His parents said he became obsessed with dinosaurs after watching the Disney movie “Dinosaur” when he was just 3 years old. It was the first movie he’d ever sat still for, and he was soon sculpting clay dinosaurs. He went on to create his own dinosaur encyclopedia, featuring his artwork as well as descriptions of each dinosaur. Although Sheng Jie doesn’t talk much, he loves to name all of the dinosaurs from A to Z. 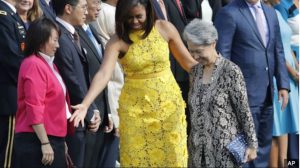 In 2011, after teachers noticed his artistic abilities, Sheng Jie became one of the first students in Pathlight’s Artist Development Programme. Professional artists work with the ADP students to help them develop their talent. When possible, the work of the students is turned into merchandise to benefit both the program and the students, who earn royalties on every sale. Sheng Jie’s dinosaur drawings are featured on pouches such as the one that Mrs. Lee carried, as well as notebooks and notecards. The specific pouch showcased by Mrs. Lee sold out within 24 hours.

Linda Kho, Pathlight’s principal, told the BBC, “We were pleasantly surprised and honoured that she chose to bring this bag on her official visit. It gave such a great mileage for the artist on our Artist Development Programme (ADP).”

Mrs. Lee also gifted Mrs. Obama a set of mugs and cups featuring the artwork of another ADP student. We know it’s unlikely, but we think it would be great if they became a permanent White House installation!

His First Time at the Theatre