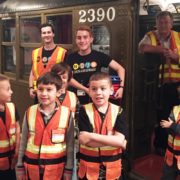 If you’re planning a trip to New York City, be sure to add a stop at the New York Transit Museum in Brooklyn to your itinerary. The museum, open since 1976, has exhibits and collections featuring all things to do with public transit in the Big Apple, including the evolution of the subway system, part of a city bus where visitors can take the wheel, and a scale-model collection of trolleys and work cars. It is located in a former subway station.

For the last five years, the Transit Museum has also had a “Subway Sleuths” program for children in grades 2-5 on the autism spectrum. In 2016, the innovative program won a National Arts and Humanities Youth Program Award.

Meant more for locals, Subway Sleuths is an after-school program that “uses a shared interest in trains among kids on the autism spectrum as a means to encourage peer-to-peer interaction and develop social skills and confidence through goal-oriented sessions,” according to the museum’s website. Participants work in pairs and collaboratively in groups to solve mysteries in the museum’s subway station exhibit, using clues and walkie-talkies.

According to Regina Asborno, deputy director of the museum, “It’s all about taking turns and communicating, but we layer it all around transportation, which is something they love.”

Space in this program is limited to 36 children, and all candidates go through a screening process. “Semesters” run in both the spring and fall, and scholarships are available. Parents of past participants attest to the social skills that their children gained, as well as new friendships and increased confidence in communicating. All sessions are run by a Transit Museum educator, as well as a special education teacher and a speech-language pathologist who have been trained in ASD support.

In addition to the Subway Sleuths program, people with ASD are also attracted to other features of the transit museum, including the interactive exhibits.

“You have a track and a train and you have a schedule and you have times and places and it’s visual and you can see it and you can experience it. And it’s knowable. It’s not a lot of change. And that’s calming and very comforting,” explains autism specialist, Susan Brennan.

Recently, representatives from 60 cultural institutions came to learn about ways to use the exhibits at their own museums to attract and engage the autism community. We look forward to the spread of autism-friendly programs and exhibits to museums around the world.