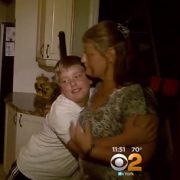 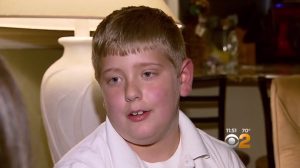 Unfortunately, vehicle fires on the Garden State Parkway aren’t all that rare. Yesterday, however, a small school bus carrying seven children with special needs caught on fire along the major highway. Luckily, a potential disaster was averted thanks to one passenger’s sensory skills.

The bus was on its way home from Mount Carmel Guild Academy in West Orange, N.J., when it first started smoking. Thankfully, 10-year-old Alex Perez, who has autism, noticed the smoke coming out near the bus’s front door. He yelled out for the driver, who pulled the bus over to the side of the road. Everybody onboard was able to get out safely, thanks also to first responders, who were already on the scene. One child was treated for breathing issues, but otherwise, everybody was alright.

Alex told CBS New York that he sat in a police car for about an hour, watching the fire from the fully engulfed bus spread to nearby trees. However, he doesn’t think he’s a hero: “I was like the second hero,” he said. “I was like the sidekick, I guess.”

What we love about this story is not just that Alex saved the day, but that he likely smelled the smoke because of his sensory issues. As his mother, Michelle Perez, said, “He’s high sensory, so he can pick up smells, sounds really quick.”

In other words, Alex’s sensory “disorder” turned out to be a good thing–for him, the bus driver, and six other children. That’s pretty ausome.

The Day My Daughter Surprised Us All
Scroll to top