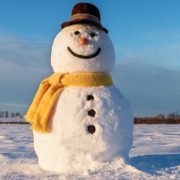 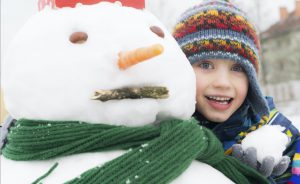 Back in December, on a cold and snowy night in Pendleton, Oregon, 6 year-old Billy Larsen found out that school was cancelled for the next day. While children are typically happy to have a snow day off from school, Billy—who has autism—was upset because the snow day meant the Christmas party that his class was supposed to have the next day wouldn’t happen either. And he had been really looking forward to it.

After he’d finally fallen asleep, Billy’s mother Holli tried to think of a way she could cheer up her son so he wouldn’t be so upset in the morning. She thought of how much he loved snowmen, and considered going outside to make one but, she admitted to The Register-Guard, she was tired and didn’t want to go out in the cold and snow. Her husband was already sleeping because he leaves early in the morning for work.

So, on a whim, she posted a message on the local classified’s Facebook page that she would pay $20 to anybody who came over to “build my special need son a snowman right now. Want him to be surprised in morning. School was canceled tomorrow & Christmas parties, etc. This may help him.”

She didn’t know if anybody would read the ad. But about a dozen strangers showed up to create snowmen, including at least one family and some buddies looking for gas money. They pointed their vehicles to the front yard so they could see, and started to gather snow.

Unfortunately, the snow was too powdery to build with. Luckily for Holli and Billy, the intrepid builders didn’t give up. Instead, somebody suggested they use the snow that had been cleared in a local Dollar Tree parking lot. They went there and filled three pickup truck beds with the packable snow and brought it back to the Larsen’s yard.

Somebody had brought a carrot for a nose; somebody else had brought some hats. They found rocks and sticks for eyes and mouths. It was a team effort from complete strangers, and some even refused the $20 in the “Christmas spirit.” As one of them said, ““We were just happy to help this kid out for Christmas.” Holli was overwhelmed by their effort and generosity.

What did Billy think the next morning when he saw the army of snowmen in the front yard? “It was awesome!”

Sometimes it really does take a village.