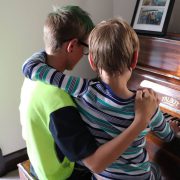 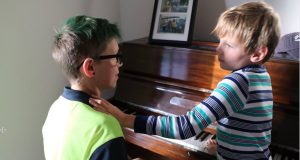 Our friends over at School of the Road may have finished their cycling journey across the U.S., but they’ve still got lots of great news to share. We couldn’t help but smile when dad extraordinaire, Travis Saunders, posted this on their Facebook page a few days back, and we’re sure you will too:

“My awesome seven year old son Patch (on the right in the photo) was diagnosed with autism at 21 months of age and is minimally verbal and has severe repetitive and restricted behavioural patterns and sensory needs. Making friends is really hard with limited language and even more difficult when others find it difficult to interpret your behaviour. And this is what makes this story so beautiful.

Everyone meet Nicholas; the 13 year old boy who lives around the corner. He is the boy on the left in the photos.

The boys kicked the soccer ball together. Nicholas then showed Patch his awesome uni-cycle skills and then the unbelievable happened. Nicholas sat down at the piano and started playing a song that Patch had heard before. Patch then sat down next to Nicholas at the piano for over two minutes. (Now, to understand the significance of this you need to know the back story. Patch generally runs away after a short time frame after hitting one of the keys and has high sensory needs)

But tonight was different. Nicholas had Patch’s attention. Nicholas made Patch feel calm and comfortable.

Thank you Nicholas. This was such a significant moment in Patch’s life and I want the world to know just how brilliant you are.”

In Search of Joy (Because Autism Isn’t Always Awesome)

The Many Things I Love About My Child
Scroll to top