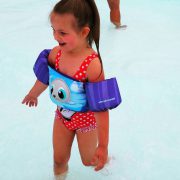 When Stephanie Skaggs took her 5-year-old daughter Baylee to Kentucky Kingdom last Friday, she didn’t plan on talking to another mom there about her kids’ behavior. But before their visit to the water park was done, that’s exactly what she did. And, because Stephanie wasn’t sure she got her point across, she decided to tell the entire story on her Facebook page when she got home.

What awful thing happened that forced one mom to have to talk to another mom about the way her kids had treated her daughter? Well, it’s not what you’d expect.

Baylee has autism, and is mostly non-verbal. Stephanie had been working with Baylee on waiting in line for the water slide as patiently as possible. She had developed a whole routine for her daughter, and her daughter was learning it, and showing more patience, each time they got in the line. Unfortunately, not every child successfully waits their turn, and soon enough, Baylee was getting cut in line. As Stephanie wrote, “for the most part no big deal, except for a kiddo like mine, who really doesn’t mind much that she had to wait longer, but is very upset that the steps of the routine she just learned are now out of whack.”

As parents, grandparents, and teachers know, coping with unexpected changes is not something that comes easily to most kids with autism, and Stephanie braced herself for either Baylee’s reaction or other people’s reaction to Baylee’s reaction. That, Stephanie wrote to the unknown mom, “is when your daughter looked up at me and said ‘she can go ahead of me.’” Baylee hadn’t even had time to get upset, so Stephanie chalked up the girl’s behavior to her just being sweet and well-mannered.

It wasn’t long before Baylee got cut in line again, and again the child in front her—this time a boy—let her go before him. Stephanie again praised a child she didn’t know for his kindness and good manners. She was surprised to find two different children who seemed to intuitively know how to be kind to Baylee. Then she saw them together and figured out they were siblings.

“I told them both how great it was that they looked out for someone who was different.. and the difference that small acts of kindness make even if it doesn’t seem like much. They really touched my heart.”

Then Stephanie asked the boy to point out his mother, so she could praise her for raising two compassionate children:

“When I came to you and told you about my experience with your kids and told you that they were super kids and you are doing a great job, you said ‘I don’t know about that.’”

Most of us are never totally sure that we’re raising our kids as well as we intend to, or that they’ll take our words and turn them into actions. It’s obvious to all of us, except this mom, that she’s doing a fantastic job. We could use more like her.

“Sure your children’s kindness helped in that moment to avoid a meltdown, and that is kind of a big deal for kids on the spectrum, but I will tell you what is an even bigger deal though, and that is that it gave me some HOPE! When I looked at those sweet little faces, filled with pride as I praised them, it made me happy to know that more moms are raising their children the way you are! So I just wanted to take the opportunity again to thank you and let you know you are doing a really really good job!”

It Was Never Just a Steak: Date Night as an Adult With Autism
Scroll to top