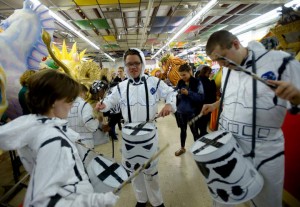 Photo courtesy of The Advocate

I just read a fantastic article in the Advocate, about a group of teens with autism who marched in a Mardi Gras parade in New Orleans this past Saturday. If you’ve ever been to New Orleans during Mardi Gras, then you know what an overwhelming experience it can be for anybody, let alone somebody with sensory issues — we’re talking loud music, yelling, crowds, lights, a wild array of colors, and did I mention LOUD NOISES? It’s likely not at the top of any list of potential vacation spots for any parent planning a trip with a child with autism.

But yet, here’s a group of seven children and young adults with autism who didn’t just attend the Mardi Gras parade, they participated in it. Amazing! The group, known as the “Stomp Troopers,” are all students at a studio in New Orleans called the NOLArts Learning Center. The Stomp Troopers project came out of behavior-based therapeutic drama, music, and art classes that began this past December and are led by art therapist Kate Lacour, with the help of volunteers. For the past five weeks, Kate has been blogging about the techniques need to help the kids learn everything from sewing electroluminescent (EL) wire to their costumes to make them light up, to creating drums out of buckets, to creating their own logos.

Of course, the biggest challenge wouldn’t be known until the Stomp Troopers actually found themselves amid the din of Bourbon Street during Mardi Gras. But Lacour has been preparing them for this throughout the process.

“Mardi Gras can be overwhelming even for folks with the most robust sensory systems, and we are very aware that every step should be taken to minimize irritation from noise, movement, physical sensations and general chaos,” Lacour wrote on her blog. “Because novelty is usually aversive, things go more smoothly when presented in small pieces.” These small pieces have included using videos and pictures to help “envision costume themes or parade throws.”

Credit also has to go to the organizers of the Intergalactic Krewe of Chewbacchus parade, the 900-member Chewbacchus Krewe. (As you guessed, members are fans of all things Star Wars, as well as Star Trek and Dr. Who.) They worked with Lacour and her students, helping them design the drums, which are intended to help the Stomp Troopers drown out surrounding noise with their own, controlled noise. They also had them attend rehearsals, and made sure the group had a place right behind the Preservation Hall Jazz Band, at the front of the parade.

Chewbacchus founder Ryan Ballard is happy to be a part of “dispelling the idea that autistic kids shouldn’t march.” 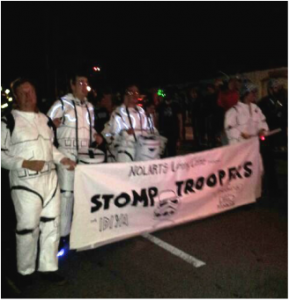 “They came up with the concept, looking for a parade to accommodate children with autism, and I said absolutely,” Ballard said. “The Chewbacchus ethos is one of truly open acceptance.”

And it isn’t just the general public and the Stomp Troopers themselves who should be learning from the experience–it’s also families of children with autism. Sarah Ambrose, a music teacher for kids with autism, told The Advocate: “A lot of families feel they can’t fully engage in New Orleans culture when they have autistic kids,” Ambrose said. “We want to say nay to that.”

How did it turn out? It was an overwhelming success, even when the parade dragged on for an unexpected three hours. in Lacour’s words:

“When they reached the end of the route, the kids were exhausted but elated. ‘We did it! crowed Oliver. The whole crew cheered.”

We only wish we could have been there.

To find out how it went, read Kate Lacour’s blog here.

Looking to the Years Ahead

A Letter to My Neurotypical Middle Child
Scroll to top