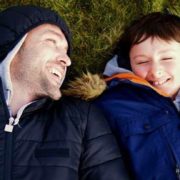 They’ve both come a long way since Jaco’s diagnosis. Richard, who didn’t want to talk about it at first then found that when he did talk about it, nobody really understood. People thought he was in denial, and even deluded, about his expectations for Jaco. But Richard believes you can’t put a limit on a child, and especially a child with special needs.

And he’s learned to just let Jaco be, to talk if he wants to talk, to just exist quietly if he doesn’t want to talk. “All I needed to do was work out what life on his terms was, and live it with him.” Watch below.

She Has Non-Verbal Autism, But Her New Friend Understands Her Just Fine

The Autism Community: A Community of Strength
Scroll to top