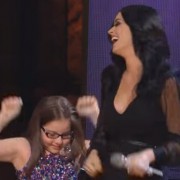 Katy Perry is one of the most famous singers in the world with number one hits like “Teenage Dream”, “California Gurls” and “Firework”.

She is also the first woman to have five number one singles in America from a single album.

However, for the autism community she has done so much more. She has provided hope, inspiration and tears of joy for millions of people worldwide.

In 2012, at Comedy Central’s “A Night of Too Many Stars”, Katy teamed up with 11-year old Jodi DiPiazza (who has Autism) to sing her hit song “Firework” and it could not have been more amazing. After the performance she said:

I will never forget last night. It was the most important moment thus far of what I do.

We couldn’t agree more. Over 9 million views later, this video will eternally be one of the greatest moments in music.

Editorial Team at AutismAwareness.com
For parents, family, friends and those with Autism, we provide information to help you put the pieces of the puzzle together.

Latest posts by AutismAwareness.com (see all)

The Life that Built Me