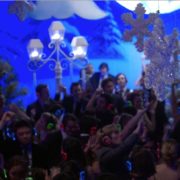 I admit it—I binge-watched “Atypical.” And, while I recognize there are both fans and critics of the show, I’m sure you found the idea of a “Silent Prom” as fascinating as I did. In fact, I loved the idea so much, I was immediately curious to know whether this was “a thing” in the real world.

It turns out that it is, and it isn’t.

There are several entertainment companies that host weekly “silent discos” (also called quiet clubs), mainly in big cities such as New York City. At these clubs, customers each receive a set of wireless headphones, just like the promgoers on “Atypical.” However, the clubs have three DJs spinning music on three different “channels” and the dancers can tune in to any of the three (making it a competition between the DJs for the most listeners).

Companies like SoundOff, Silent Events and Hush Concerts rent out wireless headphones and audio equipment for various occasions, including college dances, but at a cost that’s likely prohibitive for most high schools.

While it appears that the idea of a silent prom is currently mostly a Hollywood dream, schools can still host sensory-friendly proms, like the Shine! Prom. Or do what these high schoolers in Georgia did: They put on a second prom with low music and no bright lights so that a schoolmate who suffers from seizures could attend. Inclusion at its most caring.

The Top 10 Things the Best Teachers Do

Nothing Like the Autism You See on TV
Scroll to top