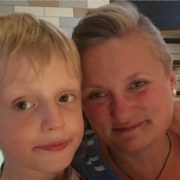 As a mum of seven, I have many years of experience with the back-to-school thing. New shoes, earlier bedtime and alarm call, packed lunches and hunting down the PE kit. But that was before we had a child diagnosed with ASD.

Towards the end of term, my boy was getting more and more distressed with every day of school. I was having to become more and more imaginative with ways to coax him off the floor, to eat and get ready for school, to get out of the door, along the road, into the playground and finally into the classroom.

It was exhausting and upsetting even without the scornful/pitying/bewildered looks from other parents.

I am lucky in that I get a good level of support from my son’s school, but even so I breathed a sigh of relief when the Easter holidays finally arrived and I could take a day off from that particular nightmare.

I wondered if the lack of school routine would prove difficult, but once I had decided that on the whole, dressing in day clothes could be optional, he soon settled into his own routine. It made it much easier for him to tolerate any plans we had as a family.

The end of the holidays were looming – they are always over far too soon. I realised to make transition easier for him, I was going to have to start preparing him to go back to school.

We started in the same way we prepare our neurotypical children: Being more aware of the bedtime routine, bringing meals back to more “school hours” friendly times. Sorting out uniform, shoes and PE kits. (I swear someone steals them and hides them during the holidays!)

I decided it might be good to talk about what was going to happen with my boy – he likes to know what the plan is.

Firstly though, I talked about what we had done through the holidays. We chatted about what he had enjoyed most and why. He was relaxed and happy remembering all the fun he had had. Then I suggested he could tell his classmates and teacher about his favourite thing – we talked about how he could bring it up and what he might say. We discussed taking a shell he found at the beach in to show people.

He will spend all of his time alone if left to his own devices, so I thought this was a good way of giving him tools for the cloakroom/playground socialisation he often struggles with.

I allowed him to choose his favourite underwear for the following day at school, and put his favourite comfort foods in his lunchbox – OK, so it was a bit beige, but I knew he would eat it and be happy to see his faves in there rather than be challenged by unfamiliar or less-tolerated foods.

When it came to crunch time, he still fell to the floor and went into his panic mode so, yes, I confess, I bribed motivated him. I showed him three tiny chocolate mini-eggs and promised if he walked nicely to school with me, he could eat them in the playground. I promised my neurotypical daughter she could have some when she got home – luckily, she’s very understanding of her brother’s different needs.

This did the trick and he went into the classroom with no further stress.

The next day, he was more settled. Although he was initially reluctant to leave the house, he responded to our more usual chocolate-free motivational efforts – timing, playing verbal and spotting games, and planning future events that he loves to do.

I am lucky – my boy is verbal and bright, but still the school run can descend rapidly into an emotional car crash without planning and careful management. I’m always looking for new ways to make life easier, for him and for the rest of us at that busy time of day.

Founder at Mad Mum of 7
Afra Willmore is a Hertfordshire-based ex-journalist turned blogger. She writes about life as a mum to five boys and two girls at Madmumof7.com. Her youngest son was diagnosed with ASD in 2016.