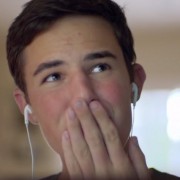 Apple’s recent videos profiling Dillan, a non-verbal teenager with autism, are just beautiful. Too often people assume that those who don’t talk also don’t think, even though speech and mind function are rarely tied to one another. As most of us know, and the rest of the world needs to be shown, just because somebody can’t communicate doesn’t mean they don’t feel or love. And Dillan proves this when he receives the computer that finally helps him open his world’s locked door.

In the first video, he explains how he experiences the world in a unique way–with his senses heightened and more intense than those of most other people—and feels emotions from those he loves.

The ability to finally have a voice gives him more control, by helping him hold onto his thoughts. It means he can finally say what he thinks, and let the people who love him know that he loves them too. Having a voice means no more isolation.

In the second video, Dillan’s mom and his therapist/communication partner discuss how the biggest challenge used to be not knowing what Dillan was thinking or feeling. We all know the value that our society puts on eye contact, with the preconceived notion that those who don’t look you in the eye when you speak aren’t listening and/or understanding you. This belief is ingrained in us since we’re young, and is one of our cultural norms that we need to change.

So many assumptions that we know aren’t true need to be shown as the falsehoods they are. Non-verbal does not mean non-intelligent. As Dillan’s mom puts so succinctly, “Not being able to speak isn’t the same as not having something to say.”

As for Dillan, he can finally show people the person he truly is inside, and not just the person they might see and not understand. Best explained by Dillan, himself, “People need a voice, not only so they’re heard, but so they’re understood and known.”

What People With Autism Want You To Know
Scroll to top