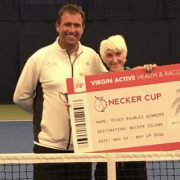 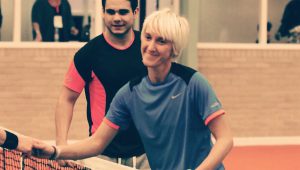 Becky Taylor, an autistic tennis player from the West Midlands, U.K., won the national Necker Cup tournament this past weekend. When you win a place at the Necker Cup, you automatically win a week-long trip to Richard Branson’s Necker Island, which is the site of the most exclusive Pro Am tournament in the world. What makes this so much more special is the fact that it was a mainstream tournament: The mental challenges that Becky faces every day made things 100 times harder as she battled for this well-deserved win.

Becky has been playing tennis for six years, and this was her third year trying for the Cup. She had just missed out on the Finals in the previous two years, but this year she won the regional tournament that took her to the next step in London. Becky got through the qualifying stage on Saturday and joined 11 other players in the Finals on Sunday. Becky then went on to win the Necker Cup for best female tennis player. She and the male winner would join Richard Branson for the Pro Am tournament on Necker Island.

It’s been a thrilling time for Becky, and she especially appreciates the support given to her by organizers Virgin Active UK and Gary Stewart. However, she’s had to turn down the opportunity to accompany Branson and other tennis pros and legends because of her autism.

“It’s sad because it was the chance of a lifetime, but just going to London to play in the Finals for two days was really hard for me. Staying somewhere different with new people…” Becky explained to AutismAwareness.com. “I have ADHD too, and I think I won’t be able to cope with all of the traveling. So, it’s a bittersweet victory, in a way. I won the prize of a lifetime, but because of my autism, it is not practical for me to go.”

As sad and frustrating as this might be, Becky should be—and is—still proud of her wonderful accomplishment.

“I still won and that can’t be taken away from me.”

How I Deal With Halloween