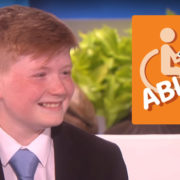 Twelve-year-old Alexander Knoll is a shining example for changing the world at any age. The tween has invented the prototype for Ability App™, an application designed to “help people with disabilities and their caregivers search for specific disability friendly features, services and employment.”

Set up as a directory, the Ability App features locations such as restaurants, stores and hotels that state they are “disability friendly.” The app then lists exactly what disability-friendly features and services are available, such as Braille signs and menus, wheelchair ramps, automatic doors, service animal relief, and more. Services such as occupational therapy, grocery delivery and transportation are also included, as are employment opportunities specifically geared towards individuals with disabilities.

Most people assume that Alexander first thought up Ability App because a close friend or family member has some type of disability, but this isn’t the case. The idea came to him after he watched a man in a wheelchair struggle to open a door at a local sporting goods store. It made him wonder whether there was an app that would have helped the man determine ahead of time that this store didn’t have automatic doors, and also list other local sports stores that did. When Alexander went home and researched, he found out that such an app didn’t exist. So, he decided to create one.

He submitted his idea to Invent Idaho when he was just 10, and won its “Best of Show” award. After that, his app prototype received awards and recognition from I Cubed, the AT&T and Imagination Foundation’s Inventor’s Challenge, and the Discovery 3M Young Scientist’s Challenge. He’s presented his plans to teachers and university students and on various news shows, culminating in his appearance last week on The Ellen DeGeneres Show.

Watch this wonderful young man tell Ellen about his amazing app below.