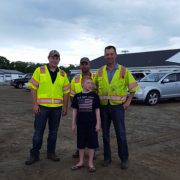 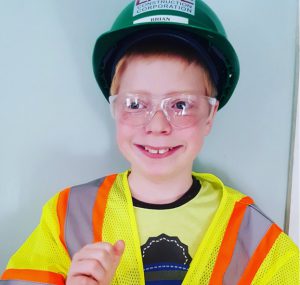 Heather Nelson, her husband Colin, and her two sons live right along a major road in Rockland, Maine, that’s currently undergoing a complete overhaul. It’s been big inconvenience for many commuters who travel the road daily, including Colin.

One day, when her husband was stuck for an hour about five minutes from home because of the construction, Heather realized that the construction company probably heard a lot of complaints about the project. But their son, Brian, was absolutely loving having the construction vehicles right outside their door. So, in an age when people seem to complain much more often than they compliment, Heather decided to thank the company for making her son so happy.

She took a short video of Brian and sent it to the Thomaston Rte 1 Project, the Facebook page for the road project, along with the caption: “I’m sorry to everyone who is completely annoyed by the cluster this construction is making….but it sure is making one autistic boy very happy that he can sit right on his doorstep and watch bulldozers and dump trucks.”

The very next day, Heather heard from a Lane Construction representative, who told her that she’d shared Heather’s post with the construction crew and they wanted to make Brian an honorary member of their crew. Before the day of Brian’s visit, one of the crew members called Heather and asked her about autism and how Brian would react to everything and what they should expect. In a blog she writes for Bangor Daily News, Heather said, “They really went out of their way to understand him.”

At the construction site, they presented Brian with his very own hard hat, along with other construction gear. They asked him if he wanted to go in various construction vehicles and, although his initial response for each was “No, thank you,” they waited patiently and didn’t rush him or force him, and he eventually wanted to take a look inside each one.

They were there for a while, and Heather wrote, “At some point, I figured we’d get some bored and tired team members. It’s hard if you’re not around autism every day to really grasp it and understand it… But we never hit that roadblock. It was clear, minutes into the evening, that this was truly about Brian. Every person there was so genuinely happy to just be there and to watch Brian. No one was on a time schedule and they bent over backwards to make sure it was all about Brian and did whatever it took to make him happy.”

While there’s no doubt that the construction crew was thankful for Heather’s original thank-you post to them, they more than returned the favor, and the honor. In Heather’s words, “Seeing Brian noticed and honored for who he is, means everything.”

The Lessons I Learned From Dory
Scroll to top