Tears welling in his beautiful eyes, he places his tiny hands on my face, bringing me close to his. With our noses all but touching he gazes; drawing me deeper still, hoping if he looks just deeply enough I will know what his heart aches to say but cannot. At moments like this, my own tears flow easily as his pain washes over me. I wish just then I could go back in time to when I was pregnant with Conor and magic away his special needs, releasing him now from this heartache.

Just shy of 18 months old, Conor was finally diagnosed with Autism, Sensory Processing Disorder, Developmental Delay and related Insomnia. Sitting with Conor on my lap in a small hospital cubicle on a hot, sunny August day, the words melted in slow motion from the paediatrician’s mouth onto the floor. I remember I couldn’t lift my head to look up while she spoke to me; the floor pulled me down to where her words lay. Listening to her explain, Conor smiled up at me as if to say, “It will be alright, Mammy. We all know now.” I finally understood then why my lovely Conor was slipping away before my eyes.

By the time he was diagnosed, Conor had been consistently awake every night since the day he was born, screaming, exhausted. He spent months at a time not eating at all, couldn’t hold a bottle, had only just learned to sit up and couldn’t yet crawl or walk. Eventually he became oblivious to us all; no longer recognising his own name, no longer speaking. He didn’t notice his sister Hailey’s pleas to play with her. He was aloof, body rocking, hand-flapping oblivious. It was Autism. The little boy I had dreamed of had gone.

I felt lost for so long afterwards; I had panic attacks, blackouts with stress. I was so unsure of everything. How could I help my little man? Was it my fault? Maybe I didn’t hug him, kiss him, love him enough; my heart ached with pain. What about Hailey? She missed having Conor to play with and talk to. She asked all the time when Conor would talk—maybe Santa would bring his voice back. I didn’t know how to explain it to her without hurting her heart. One day she waddled over and gave me a squeeze. She looked up with her piercing blue eyes and, in her three-year-old wisdom, said: “It okay, Mammy. Conor here.” She was right; he was still my lovely Conor and still her handsome brother. 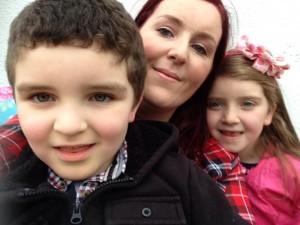 I always had a vision of what being a ‘mammy’ entailed, yet Conor has helped me to look far beyond that horizon; to look to the future always. To stay positive even when it seems all but impossible. I have learned to be a new kind of Mammy since having my gorgeous Conor. During the day I carry out Physio, Occupational and Speech Therapy. On nights when Conor can’t sleep at all despite medication, you will find me up watching that he doesn’t hurt himself as he dances and giggles the hours away.

Lately, I see how it plays on Hailey’s mind more than ever, asking when he will talk. She can’t wait to finally have someone to talk to. At the same time, I watch her with Conor. She’s always the first to take his hand, to protect him, to say “Good boy, Conor” when he masters a skill most of us take for granted. She is his biggest fan, and has a heart filled with optimism and empathy. Recently, when someone was laughing that her brother couldn’t talk despite being five, she asked the boy: “How would he like to be 5 and not be able to talk?” She said later that little tears came out but she pushed them back in. My heart broke with pain, yet with pride that she is the next generation we are raising who will protect and look out for the many vulnerable people in our world.

I am thankful every day for Hailey, Conor and their baby brother Jack. Collectively they have helped me see what matters most in life: the sleeping faces I kiss good night, the squeezes little arms can give each day and—please God, someday—the words my little ones will say.

I love you Hailey, Conor and Jack. x

Amanda gave up her law career after her first son Conor was born with special needs, later retraining as a Special Needs Assistant so she could help him and her youngest son Jack. Amanda and her family live in Co. Mayo in Ireland. She spends her days now carrying out therapies, preparing visuals for her boys to communicate and doing her best to be a good mom to all of them, including her oldest child Hailey.

Through her writing she helps to provide an insight to what living, loving and raising children in a Special Needs Family can be like for so many today. To learn more please visit her website  littlepuddins.ie or follow her on Facebook at https://www.facebook.com/thelittlepuddinsblog

I Get Lonely – by an Autism Mom.