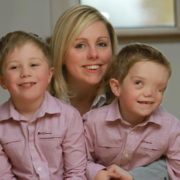 Harry was born with a very rare craniofacial condition and so, right from the beginning, we knew life would be different for us—both from the one we had imagined and from the lives of our friends.

As Harry is a twin, it was natural for us to compare his development with his brother Oliver’s. However, unlike a lot of parents, it wasn’t the delay that we noticed first.

Harry taught himself his letters and numbers way before Oliver, thanks to his electronic phonics and numbers boards. Although he couldn’t tell you, he would always choose the right answer when you asked him to select a letter or digit. He was fab. He also taught himself how to play the piano from around age 2 1/2. Of course, we know now that the familiar and ever consistent sound made by the same note means that Harry’s autistic mind hears a predictable pattern, whereas Oliver only heard noise. I was so proud!

In time, we came to see the typical signs that would lead us down the road to assessment. Harry rocked and flapped constantly, wouldn’t interact with other children at all, and was obsessive about certain items or toys. He had high scores in each area of the “triad of impairment” and at just age 4, he had his diagnosis of autism.

The diagnosis itself didn’t change anything for us as Harry had already just started at special educational provision, but it did mean that we were more aware of his behaviour and reactions and tried to explain them within the context of his new diagnosis.

Over the past 11 years, Harry has endured some huge operations to correct the shape and formation of his skull and palate. It’s impossible not to make allowances for his negative reactions to the doctors and hospitals, which he has feared, but something struck me lately when I noticed a change in him.

When telling Harry that he was going to the hospital, he used to get extremely upset and nervous. Now, he laughs and replies with “Yay! Vtech toy!” Why? Because we have positively reinforced his experience with a trip to a local toy store after each operation and procedure. We justified it as his treat for being so brave, and although it’s true that he was incredibly brave, we ended up creating another expectation and habit that is now very hard to break.

How many of his quirky autistic habits have been unwittingly created by us? And how much of his behaviour do I make allowances for by explaining it as part of his diagnosis? Here are a few examples to consider:

Harry has phases where he bakes his toys in the oven when I’m not looking.

My explanation: It’s because he’s seen me cooking or has been doing cookery at school and is taking an interest in it himself.

Another possibility: He remembers my scream from the first time and just finds it incredibly entertaining to wind me up.

Harry has started to kick out at the dog for no reason and without warning.

My explanation: He doesn’t like how unpredictable the dog is and he doesn’t like the texture of his fur, so he feels scared when the dog’s around.

He has a meltdown.

My explanation: He could be in pain, overtired or experiencing sensory overload where we are at that time.

Another possibility: He’s tired and grumpy and unable to tell me why. He’s had enough of being there or doing what we are doing and wants to go home.

He lashes out at Oliver and hits or punches him sometimes.

My explanation: He’s trying to interact and loves Oliver the most, so he focuses on him sometimes.

Another possibility: He’s just having a moment where he’s feeling particularly mean and is taking it out on his brother (like I did as a child with mine and many other siblings do).

I’m not trying to trivialise these aspects of autism at all, as they are significant challenges for our children and us as parents. But I’m just thinking out loud and I feel that I have as much a responsibility to question my own responses as I do to consider Harry’s actions.

Isn’t it just as feasible that, as well as expressing himself within the restrictions of non-verbal autism, he’s just playing up like any neurotypical child? Where does the autism stop and the child begin? It’s impossible to know.

But when I see him, even in the moments that exhaust and frustrate me, I’m also in awe of him. Of the uncomplicated way he views the world; the way he does what he wants when he wants and is free from how he “should” be feeling or acting; the unconditional love that he gives so beautifully.

So, whether they’re excuses or allowances, I have to wonder: Does it matter? Am I beating myself up and overthinking (just two of my strongest traits) unnecessarily?

Yes, maybe I do make excuses for him when I should be punishing him (that’s not to say I don’t tell him off because I do—he needs to know right from wrong). But I also make allowances for his frustrations and confusion because there are times when, without a doubt, he is responding through his autism. And let’s face it, most of the time I am too busy laughing at his crafty tricks and funny acts to wonder why he’s doing them.

Autism life is fast-paced, full of questions, and peppered with responsibility and big decisions, but never, ever is it dull. And I wouldn’t have it any other way.

Founder at Our Altered Life
Charlie Beswick is mum to 12-year-old twins, Oliver and Harry. She’s a sarcastic realist and cheeseaholic, and is thrilled to be sharing her journey.

On the Days That I Break